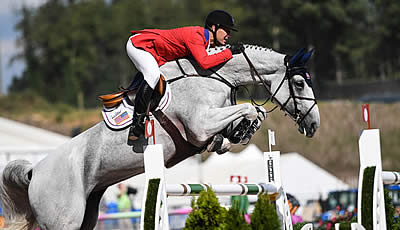 Team USA won the Bank of America Team Jumping Championship at the FEI World Equestrian Games™ 2018 in Tryon, USA, but they were chased all the way to the line by a brilliant Swedish side that took silver, while Germany claimed the bronze. It was an epic battle on this final day of the team event, and nothing came easy.

“It was unbelievable! First off, the odds were miniscule that there would be a jump-off for first place… it wasn’t what we were looking for, but the sport doesn’t get any better than this!” — Robert Ridland (Team USA Chef d’Equipe)

Out in front as the action began, the Swiss lost their grip when Werner Muff’s 13-fault round with Daimler was followed by elimination for Janika Sprunger when Bacardi VDL crashed through the first fence and then refused to tackle the second on the 14-obstacle course. With six Olympic qualifying places also up for grabs all eyes were also on the minor placings, and in the end the Swiss booked their ticket to Tokyo 2020 when finishing fourth ahead of The Netherlands in fifth and the astonishing Australians who pipped the reigning European champions from Ireland for that coveted sixth spot.

It was a roller-coaster ride from start to finish, and the Swedes, lying fourth as the action began, piled on the pressure when adding nothing to their previous day’s scoreline of 20.59 when Henrik von Eckermann (Toveks Mary Lou), Malin Baryard-Johnsson (H&M Indiana), and Fredrik Jonsson (Cold Play) posted three brilliant clears. This was enough to overtake the Germans whose total rose to 22.09 despite foot-perfect runs from Simone Blue (DSP Alice) and Marcus Ehning (Pret a Tout), four faults from Laura Klaphake (Catch Me If You Can) having to be taken into account when Maurice Tebbel (Don Diarado) picked up five.

And although American hopes were high, the result was hanging in the balance right to the very end. Devin Ryan opened the host nation account with a single mistake at the second-last fence and when Adrienne Sternlicht and Cristalline picked up five then the Swedes were out in front. But Laura Kraut rode to the rescue as only she can, steering Zeremonie home with a clean sheet to a great roar from the crowd. If McLain Ward could follow that with another clear the job was done and the gold would be in American hands. But the Olympic double-gold medallist faulted at fence seven and suddenly everything changed once again. The USA and Sweden were tied on 20.59 penalties and it would take a jump-off to separate them.

“McLain made us all work a little harder – he could have made it a whole lot easier!” joked his team manager.

But in the end, it was Ward who won it for them too, with a scorching last-to-go run with the grey mare Clinta. Both teams produced three clear rounds against the clock but Ward’s gallop through the timers saw USA post an accumulated time of 100.67 while the Swedes were two seconds slower.

Youngest team member Adrienne Sternlicht (25) was overcome with emotion at the post-competition press conference, and she wasn’t the only one to shed a tear.

“My best friends and family are here and I’m just thinking – what just happened?! You really don’t want to be woken up from this dream!” — Adrienne Sternlicht (Team USA)

“I love my horse so much. McLain has been the most unbelievable mentor for me, such an important part of my life; for me it’s been a battle of overcoming my own mind and I’m so grateful that Robert trusted me and trusted McLain enough to put me on this team and to be with Laura and Devin and McLain, three riders I’ve honestly looked up to my entire life. I’m so grateful for this opportunity – it’s been a wonderful day!” she said.