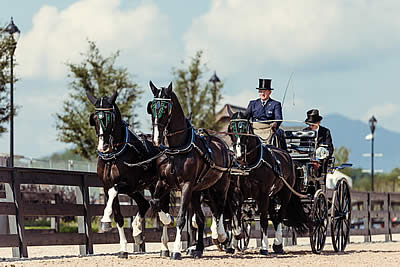 Australian Boyd Exell produced a driving dressage masterclass at the FEI World Equestrian Games™ Tryon (WEG) backed by a team of horses he rates as his “best ever” as he took a giant step towards claiming his third successive individual gold medal.

The man who has dominated driving for much of the past decade shook off the lingering effects of breaking his ankle in July, finished with a score of 31.68, putting him 3.42 points clear of the USA’s Chester Weber. For Exell it was his greatest dressage performance to date.

“In Kentucky in 2010 I did a 30 and the crazy thing is that was a beautiful test but we did not have the same power and movement of this team,” said Exell, who has seven FEI World Cup™ driving titles to his name.

“Even when the crowd cheered on the way in, which some horses don’t like, I could just feel my team power up. It was like turning a V8 engine into a V10.” — Boyd Exell (Australia)

Fierce rival Weber, who finished second to Exell at the 2014 WEG in Normandy, entered the arena with the crowd still cheering the two-time champion.

“That was sort of motivating for me, to be honest,” Weber said. “I sort of shook my head like a prize fighter and said to myself ‘c’mon’.”

It worked with a particularly fine rein-back among the highlights as Weber delighted the crowd yet further and finished with 35.10 points.

The Dutch veteran Ijsbrand Chardon, winner of the prestigious Aachen Championships this year, showed all his undoubted class and skill to grab third with a score of 41.06 in what is his weakest discipline. The five-time WEG team champion and 2002 individual gold medallist was the last of the 19 drivers to enter the arena, not that he minded.

“I was fairly relaxed, last driver is the best position. I saw Boyd’s and Chester’s points but then it was very important I made my performance,” Chardon said, before he admitted he might require some help to catch the leader.  “Boyd I need to make a big mistake – 10 points is too much. Six points to Chester is possible.”

A strong performance from Ijsbrand’s 25-year-old son Bram Chardon helped the Netherlands claim second place in the team competition. But the 2010 and 2014 WEG team champions are facing a real battle to hold onto their title.

Led by Weber and boosted by a beautifully controlled performance from dressage specialist Misdee Wrigley-Miller, who scored 42.00 and lies fourth in the individual standings, the USA will take a 10.33 point lead into Saturday’s marathon phase.

“Everyone has been telling me it is just another competition and not to worry about it,” laughed Wrigley-Miller. “But when I came into the arena it was like ‘ooomph’ – the weight of the world fell on my shoulders.”