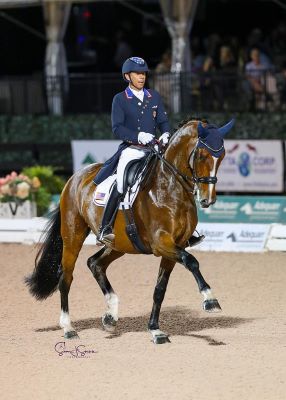 Wellington, FL – February 26, 2021 – The USA’s Steffen Peters and Suppenkasper welcomed a victory in the FEI Grand Prix Freestyle CDI5*, presented by CaptiveOne Advisors, in the first “Friday Night Stars” competition of the season. Peters and Suppenkasper, Akiko Yamazaki and Four Winds Farm’s 2008 KWPN gelding by Spielberg, danced under the lights at Equestrian Village to a score of 80.995%.

“There were lots of things that were great,” began Peters. “The piaffe felt really good, great half-passes, the pirouette felt good. To me, one of the highlights of ‘Mopsie’ now, that used to be so difficult, is the collected walk. I used to have to hide that a little bit in the corner, but now I’m doing it on the diagonal because I can really show the relaxation. That might look like a boring movement, but to me it’s huge. Of course, I risked a little bit much in that one extension, so he broke: one little fumble. The rest felt great.”

Despite having no general attendance, the night still had its usual buzz of excitement, and Suppenkasper handled the atmosphere like a pro. Peters rode to a slightly different floor plan than normal, and despite some miscommunication, still pulled off the +80%.

“The floor plan was different this time,” he said. “I do the extended walk 20 meters and then another 20 meters collected walk across the diagonal. So, the half-passes are going the opposite way. I think that was slightly confusing to the judges. There was a little miscommunication before, but it was my fault. I should have been clearer about it.

The pair has finished competing at AGDF, and they will resume their training with the hope of making it onto the final USA Dressage shortlist. Peters concluded, “We decided to bubble wrap him from here and preserve him and head back to California next week.”