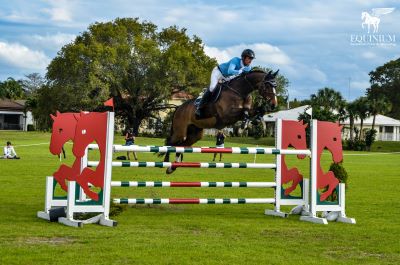 Wellington, FL (February 25, 2021) – Ireland’s Darragh Kenny once again delivered a winning performance during Wednesday’s The Ridge at Wellington Turf Tour. Set this week on the expansive fields of Polo West, the Turf Tour has been a favorite of Kenny’s, where until last week he had a 3-for-3 winning streak in the Grand Prix. However, California’s Ashlee Bond snapped a 4th Grand Prix win from him last week at Black Watch Farm, but wasn’t fast enough on Wednesday to keep him from a 2nd $5,000 1.30m Rising Star victory. A new challenger and first time Turf Tour competitor, Dutch Olympian Harrie Smolders, also jumped to a decisive finish that foreshadows his ability to steal victory from Kenny and Bond.

A first double clear effort in the $5,000 1.30m Rising Star by Hartog-Jan and rider Vincent A. Bailleul set the time to beat at 45.679 seconds. That was eventually eclipsed by Jaqueline Colborne, who jumped Lotus Sobral da Costa to the lead in 40.890 seconds. Olympian Harrie Smolders and Calina then threw down the gauntlet, blazing around the 1.30m course in 39.363 seconds. Darragh and GK Casper followed, once again proving how quick and accurate they can be, jumping off in an impressive 38.026 seconds. Last week’s Grand Prix champion, Ashlee Bond, was intent on taking the title from Kenny once again. She had the time, 36.669, but a fateful rail at the final jump, a liverpool oxer, cost her and Contefina LVF the class. Kim Farlinger and Ibalius SMH breezed around the course in 40.555 seconds.

“It is really exciting to have some of the top riders in the sport vying for victory over our jumps at our show,” said Olympian Nona Garson, who co-founded The Ridge at Wellington Turf Tour with George D’Ambrosio. “And what is really cool is while this battle of the titans plays out in ring one, we have amateurs, green horses, and juniors warming up over the same jumps and competing adjacent to them in Ring 2. This was our dream with the Turf Tour, to create a show for everyone that offers everything from FEI level Grand Prix action to a training ground for green horses and riders.”