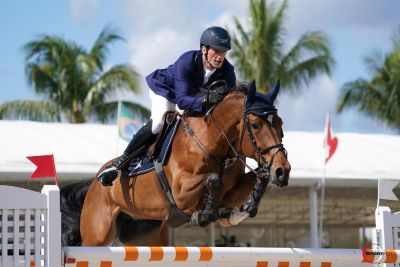 There were 56 entries in the 1.45m speed class, jumping over a course designed by Anthony D’Ambrosio (USA) and Andy Christiansen. There were 21 clear rounds. Starting out the class as the first to go was McLain Ward (USA) on Catoki, a 12-year-old Holsteiner gelding by Catoki x Cartello B owned by Ward, Marilla van Beuren, and Bob Russell. They sped around clear in 59.44 seconds, which would hold up for second place.

Deusser and Kiana van het Herdershof went just two trips later, putting in a blazing fast time of 59.12 seconds that would hold up through the entire class for victory.

Ten clear rounds went for speed out of the original 73 entries in the $37,000 Griffis Residential 1.45m Qualifier CSI2* in the International Arena. As each horse went in the ring, the leading time kept dropping, but it was Charlie Jayne (USA) and his own Amice Z who recorded the fastest clear round in the jump-off in 35.55 seconds.

“That was probably, I’m going to have to say, the fastest jump-off I’ve ever done with him,” revealed Jayne. “This being the two-star level and him doing bigger stuff lately, I felt confident that I could test it out today. I did the leave out one to two. The winner did eight [strides] on the rollback, and I challenged him there. I thought the one place I could do [faster] is if I could gallop over to the double [combination], and he came up waiting and tried his butt off for me there. After he tried so hard there, I did eight where some people did seven, and hoped for a better rollback and it worked out. I said, ‘Let’s do this’ to the last [jump], and he answered the call beautifully. He was right there for me.”

Second place went to Lacey Gilbertson (USA) and Viti de Longa, owned by Seahorse LLC. Gilbertson and the 12-year-old Selle Français mare by Contendro I x Galoubet A were close behind in 36.37 seconds.