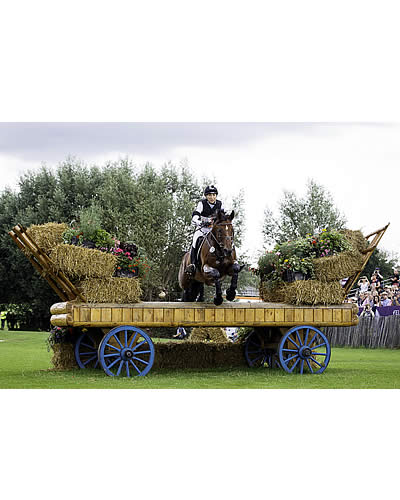 Lausanne (SUI), 14 August, 2015 – Ingrid Klimke’s brilliant season continued with an outstanding performance at Aachen (GER), where she led the home team to a convincing victory in the fifth leg of the 2015 FEI Nations Cup™ Eventing and finished first and second on the individual leaderboard with FRH Escada JS and her team horse, Horseware Hale Bob.

Although she has competed every year at Aachen since 2005, Klimke has never won the prestigious Eventing competition before, promising: “I want to read my name on the winner’s board one day,” and she made good that promise in real style today.

After Dressage, Germany held an eight-point lead over Britain, who were boosted by the brilliant score of 34.3 produced by the 2014 Young Rider European silver medallists, Holly Woodhead and DHI Lupison.

The Kiwis lay third, but rose to second place within three penalties of the German team after Jumping, when Tim Price (Wesko), his wife Jonelle (Faerie Dianimo) and Sir Mark Todd (NZB Campino) all went clear, whereas Klimke was the only member of the German team to remain fault free over the coloured poles.

But the British team was eliminated when Flora Harris and Bayano retired on the Cross Country and, after the examination of video footage, Woodhead was discovered to have jumped the wrong side of a flag at the corner in the water. Despite its last-place finish at Aachen, Britain – the only country to have contested all five legs of the series so far – still has a commanding lead over Germany in the FEI Nations Cup™ Eventing leaderboard.

The Cross Country was run in reverse order of merit and built to a crescendo as the crowds watching the finish in the main arena became more and more excited. Rudiger Schwarz’s Cross Country track provided an exhilarating – and exacting – contest as the time of six minutes 40 seconds was tight and the demanding lines caught out a number of riders.

Fence 16b, a brush fence that had to be jumped on the angle following a corner, caused the most problems and Andrew Hoy (AUS), who produced a brilliant performance out of Cheeky Calimbo to put the three-man Australian team into fifth place, wisely took the long route here.

Louise Svensson Jahde (SWE) suffered the only horse fall when Wieloch’s Utah Son hit the table fence after the water at fence 9. Vets treated the horse for a cut on its chest, which required stitching. The rider was unhurt in the fall.

Only a handful of riders achieved the optimum time: three were German team members – Klimke, world champion Sandra Auffarth (Opgun Louvo) and Dirk Schrade (Hop and Skip) – and one was a Kiwi, Tim Price.

This was a fiercely competitive and thrilling FEI Nations Cup™ Eventing contest, but the result left no one in any doubt as to who the favourites will be for the Longines FEI European Championships at Blair Castle (GBR) next month.