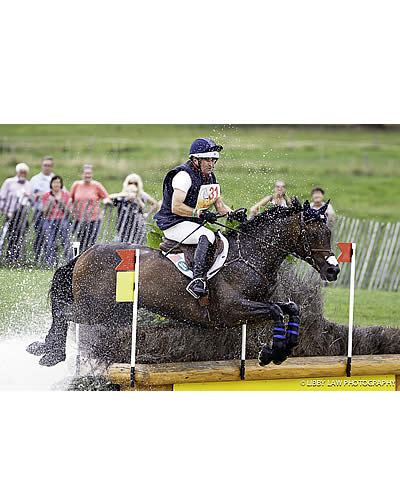 Aachen, Germany – The Land Rover U.S. Eventing team wrapped up the Aachen CICO3* on Friday with the highly influential cross-country phase of the prestigious German competition. The team, consisting of Phillip Dutton and Fernhill Cubalawn, Lauren Kieffer and Veronica, Colleen Rutledge and Covert Rights, and Lynn Symansky and Donner, put forth a solid effort to receive the Team Bronze with a final score of 192.90. Additionally, both Dutton and Kieffer made the top 15, finishing 12th and 15th, respectively.

“I’m obviously really pleased with way the horse went today,” said Dutton. “Time was tough to make, and that was probably the fastest he has gone, and I was happy with the way he handled it.”

Their trip to Aachen was made possible with a Karen E. Stives Endowment Fund for High Performance Eventing Competition Grants through the USET Foundation. The first day of competition, on Thursday, consisted of the dressage and show jumping phases. Dutton and the 12-year-old Holsteiner gelding had a quality dressage test to score 46.4 and double-cleared in show jumping.

“This is as good a competition in the world as any, and overall it went well,” Dutton added. “Even a half a point makes a difference here, and we had some bobble in a couple dressage movements that cost us. He is a relatively inexperienced horse, but he shows a lot of promise, and I’m excited to see what is ahead.”

Kieffer (Middleburg, Va.) and Team Rebecca, LLC’s Veronica brought their stellar week in Aachen to a close, finishing 15th place with a score of 52.0. They had a clear round but had 10.4 time penalties. The pair was in Europe thanks to a Karen E. Stives Endowment Fund for High Performance Eventing Competition Grants through the USET Foundation for the Aachen CICO3* and Blenheim CCI3*. On the first day of competition, Kieffer and the 13-year-old Dutch Warmblood mare had a lovely dressage test to score 43.6 and added a double-clear show jumping round.

Land Rover USEF Competition Grant recipients Lynn Symansky (Middleburg, Va.) and Donner were the pathfinders for the U.S. team throughout the competition. The pair had a great cross-country round until a runout at the corner at 22A. They incurred 31.2 time penalties and finished with a score of 90.1 for 27th place. On Thursday, she and the 12-year-old Thoroughbred gelding owned by The Donner Syndicate, LLC scored 49.9 in their dressage test and added nine penalties to their score in the show jumping phase after having one rail and five time faults.

On Tuesday, the U.S. received a fourth invitation and added Rutledge (Frederick, Md.) and her own Covert Rights to the team, arriving in Europe with the help of a Jacqueline B. Mars Competition Grant through the USET Foundation. She and the nine-year-old Thoroughbred Cross gelding started off well over the tough track but ran into some trouble and ultimately were eliminated when Rutledge fell in the water at obstacle 20B. On Thursday, the pair had a respectable dressage test to score 50.7, adding 12 faults in the show jumping phase.

Germany earned top honors with a score of 120.50 while New Zealand collected the Silver medal with a score of 126.80. Great Britain originally finished in third, but the Ground Jury requested to review video footage of Holly Woodhead (GBR) and DHI Lupison at fence 20B. The pair was eliminated for missing a flag at the fence, thus boosting the U.S. team from fourth to third.

View individual and team results from the Aachen CICO3*.