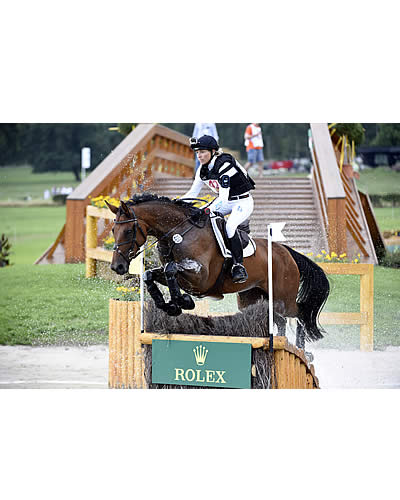 (Aachen, Germany 14 August 2015) A champion team will always be a team of champions. The German team proved this is very much true, after dominating the individual leader-board in the DHL CICO 3* Eventing competition today in Aachen.

Ingrid Klimke occupied first and second position and Sandra Auffarth took third. The competition is the Nations Cup of Eventing, which is running alongside the 2015 FEI European Championships, not to be confused with the FEI Eventing Championships that are taking place at Blair Castle in Scotland this September.

Going into the final stages of the eventing, all eyes were on Ingrid, undoubtedly the favourite, having already secured first place on her horse Horseware Hale Bob earlier in the day. She had the majority of the large home crowds behind her as she stormed through the arena on her second horse, FRH Escada JS, to secure her individual win and team Germany’s victory.

Having proved herself a worthy contender during the show jumping element of the competition, by securing first and fourth place, Ingrid knew the stakes were high and the pressure was on. The duo of Klimke and FRH Escada JS spearheaded the German teams convincing win in the Nations Cup with New Zealand holding onto second place, thanks to a brilliant display of horsemanship from Tim Price (individually lying in fourth), and the United States of America in third.

After Ingrid had finished her final round, it looked as though Great Britain had taken third place, thanks to good rounds from Gemma Tattersall and Holly Woodhead. Unfortunately, after the judges re-looked at Holly’s round and the decision was made to eliminate her, due to her horse’s shoulder jumping outside the fence-flags on the course. This then meant that the United States team, consisting of Phillip Dutton, Lauren Kieffer, Lynn Symansky and Colleen Rutledge, moved into third place.

Following her victory, Ingrid said, “I was so pleased already with the dressage because both horses did a lovely dressage and then they went clear in the jumping, so today they were very motivated and it was easy to gallop them inside the time.” Klimke, ecstatic for her own individual victory, noted how her whole team helped her performance in Aachen. “I must really say though, it is very much team work. We have a whole supporting team behind us, so from my point of view it was just a pleasure to ride. They stand behind you and give you the confidence to go for it!”

Rolex and the European Championships

Rolex is a major supporter of the biennial European Championships, an event which brings together Europe’s best equestrian pairs. For the first time, the FEI European Championships in Aachen, Germany, this summer (11-23 August) unites five equestrian disciplines – Show Jumping, Dressage, Driving, Vaulting and Reining. Competitors test their metal strength and show their equine discipline in front of crowds of up to 40,000.

Rolex is proud to support an occasion where the values that the leading luxury watchmaking brand holds dear – courage, precision, empathy, sportsmanship and passion – will be so clearly demonstrated.