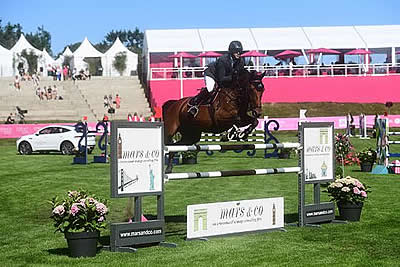 The International Jumping of Dinard’s kick-off was given on the magnificent Val Porée site, entirely adorned in pink colour for the occasion.

As Danièle Mars, president of the show, highlighted, the main equestrian event in Britanny, which welcomes close to 50 000 spectators, adds one star to its constellation, since it offers, besides the CSI5*, 1* and Young horses, a CSI3* instead of the previous CSI2*. Each category had a chance to discover the grass arena with its unique and charming topography, as well as the sand arena, beautifully landscaped.

In the first class of this label, although he was competing against 60 determined opponents, the rider from Normandy, Patrice Delaveau, riding Vestale de Mazure HDC (Landor S), his partner for a year and a half, had the first French national anthem played today when signing the fastest time in the Mars & Co class. « She is a very competitive mare » the rider commented.

The Document Store class, second class of the day at this level, goes to the rider from Britanny, Jean Le Monze, associated to Urbin d’Yserand, in front of the King of Morocco’s rider, Abdelkebir Ouaddar, and the young French Edward Levy.

Out of 54 future 7 year old champions, 37 found the key to the 1m30 high course designed by Jean Philippe Desmarets and signed a clear round.

41 of the best riders in the world rode for the first time on the grass arena at 4.45pm over a 1m45 course designed by Jean François Morand, in a class supported by Alvalle, historical partner of the event, with a prize money of 25000 euros. If some riders chose this class to prepare for Sunday Grand Prix, some others decided to play the game and fight for the best time. It was the case for the French Cédric Angot, second last to go with Talent des Moitiers, who stops the clock at 34’’81, and has the Marseillaise played in the Val Porée stadium. The second place goes to the Belgian Grégory Wathelet/Eldorado van Het Vijverhof, in a time of 36’’42, while the Israeli Daniel Bluman and Edison place 3rd in 36’’76.