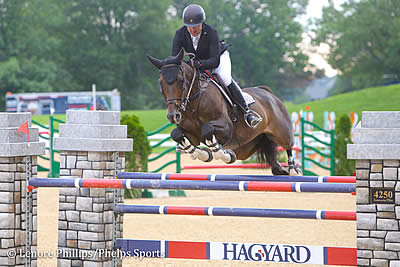 Lexington, Ky. – Aug. 2, 2018 – The $25,000 Hagyard Lexington Classic proved to be a challenge for almost everyone except Ireland’s Lorcan Gallagher, who produced two of the only four clear rounds out of a starting field of 53 horse-and-athlete combinations on Thursday evening. Gallagher, who was ninth in the original order-of-go, produced the first clear round of the night on Hunters Conlypso II. There was not another clear round until he returned to the ring on Charlie. Facing off against veterans Todd Minikus and Alison Robitaille, Lorcan produced the fastest double-clear round on Hunters Conlypso II, stopping the clock in 42.139 seconds. Robitaille and Ace were hot on his heels with a double-clear ride that finished in 42.465 seconds. Gallagher was third on his second mount, while Minikus placed fourth with two unlucky rails over the short course.

Gallagher took over the ride on Hunters Conlypso II one year ago and their mutual trust in one another proved to be what made the difference in Thursday’s class. Owned by the Dacantos Group of Wellington, Florida, the 10-year-old Hanoverian stallion masterfully maneuvered through all of the challenges that were presented by Brazilian course designer Anderson Lima. Gallagher drew heavily on some of their past grand prix performances to produce the early clear in the first round, which held fast until Gallagher returned on Charlie. The crowd in the stands of the Rolex Stadium cheered as Gallagher and Charlie crossed the timers fault-free next in an unlikely but exciting turn of events.

Show Jumping veteran, Minikus, used the second of his two rides, Excel, owned by Autumn View Farm, to help ensure the crowd a jump-off. Another American favorite, Robitaille, piloted her own Ace to make it not only an incredibly competitive jump-off but also a battle of men versus women.

Gallagher returned to the jump-off with an intent to secure the lead with a competitive pace, which he did in spades. Although horses and riders are supposed to return to the ring for the jump-off in the order in which they competed in the first round, Gallagher was lucky that Robitaille stepped up to go second in the jump-off, allowing the Irishman time to prepare Charlie after his lightning fast round on Hunters Conlypso II. Although Ace gave it his all, the pair finished in a close second place. Charlie, who Gallagher has only recently started riding, secured third place and Minikus, who is always up for a good jump-off, had two unlucky rails to finish in fourth place.

Thursday’s first and third place finishes will comfortably seat Gallagher atop the leaderboard in the Hagyard Challenge Series with 550 points, ahead of fellow Irishman Darragh Kenny who has 470 points. The series consists of seven grand prix classes, where, following the final event, a cash prize of $50,000 will be awarded to the athlete who accumulates the most points throughout the summer competition. With series leading riders spread out across the country, the race for the bonus is still incredibly close.