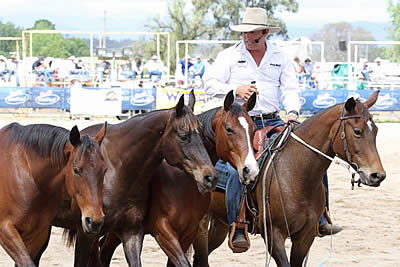 TRYON, NC, USA – August 2, 2018 – The World Equine Expo™, hosted September 11-23, 2018 alongside the FEI World Equestrian Games™ Tryon 2018 (WEG) at Tryon International Equestrian Center (TIEC), is set to host an array of diverse programming that includes renowned exhibitions, demonstrations, authors and speakers. The Equus Film Festival and an extensive Art Festival will accompany more than 200 vendors in a family-friendly, immersive and interactive experience for all World Equine Expo™ attendees. Access to the World Equine Expo™ and all programming is included with any WEG competition ticket, but Grounds Passes, which offer access to the general public facility grounds, can be purchased individually at www.Tryon2018.com.

This unprecedented celebration of human-equine interaction will allow WEG and World Equine Expo™ attendees to experience nationally and internationally renowned clinicians and performers such as Guy McLean, Double Dan Horsemanship, and Monty Roberts, among many others. From informative and interactive to jaw-dropping and innovative, the exhibitions, entertainment, and experiential components of the World Equine Expo™ are a key component of the programming curriculum, and these equestrian exhibitions will be highlighted in Ring 1 alongside the Vendor Village at the heart of TIEC property.

Guy McLean, an Australian horseman and entertainer is known around the globe for his liberty performance teams, which feature Australian Stock Horses and will provide inspiring and educational exhibitions appealing to the young and old alike.

Monty Roberts, known worldwide for his “Join-Up” technique will be present two exclusive exhibitions, including working with an “unworkable” horse and collaborating with a U.S. veteran and an unschooled horse to teach each how to listen, respond, and ultimately heal each other. Roberts has trained horses for celebrities and world-changers including Her Majesty Queen Elizabeth II and the legendary Spanish Riding School and will bring his expertise to the Expo on September 19-20.

The World Equine Expo™ will also feature the World Breeding Federation of Sport Horses (WBFSH) Developing Jumpers Exhibition, presented by Spy Coast Farm, focusing on the evaluation of developing jumpers to educate the public on the criteria for judging young jumpers, including the height of fences and technical abilities five and six-year-old horses are required to demonstrate. This demonstration will serve to draw attention to Young Horse Championships, such as the World Breeding Jumping Championships. While the format will be similar in principle, it will vary from the annual competition in Lanaken, Belgium. Twenty-two horses will compete in jumping exhibitions from on September 20th and 21st at the World Equine Expo™.

Michael Gascon of Gascon Horsemanship has finessed his expertise with gaited horses, as well as his demonstrations and clinics on topics including Paso Soccer, 30 Minute Wild Horse Starting, Horsemanship 101, Obstacles, Solving Problem horses, and much more. Gascon will be joining the World Equine Expo™ with his incredible equine Paso Fino partners.

Showcasing unique classical Dressage skills and bridle-less riding expertise, J. P. Giacomini will be perform over 24 separate demonstrations throughout the course of two weeks at the World Equine Expo™ with his four talented Andalusian and Lusitano homebred stallions. Giacomini will be covering topics from classical Dressage at the Grand Prix level to lunging for balance, contact and bridle-less riding, preparing for a classical piaffe, work in-hand for biomechanics development, Endotapping™ and much more.

Kim Van Kampen, a founding partner of the Adequan® Global Dressage Festival (AGDF) and a longstanding partner of the Wellington Equestrian Partners (WEP), will bring eight horses to perform quadrilles on the September 13 and 14, at midday throughout Dressage competition days during Week One of the WEG. A quadrille is a riding team comprised of four dressage riders who will compete together to music. Quadrilles are easily compared to a drill team and originated from the Spanish Riding School.

Mustang Leadership Partners, LLC will be present on-site during the World Equine Expo™ as title sponsor of the Equus Film Festival and will provide a unique demonstration programming schedule. Mustang Leadership Partners, LLC provides girls and young women with an opportunity to develop, practice, and improve relationship skills, responsibility, social accountability, self-awareness and self-confidence through interactions with Mustangs.

The Equus Film Festival, presented by Mustang Leadership Partners, LLC, will showcase eight discipline-dedicated films and host meet-and-greets with directors and producers to an extensive celebration of equestrian art. The Equus Film Festival will air films from 12:00 p.m.-5:00 p.m. every hour with special screenings of popular films airing each evening between 6:30 p.m.-8:00 p.m. The Art Festival will also feature galleries of local and international artists exploring all facets of horse and human interaction.

At the Coca-Cola® Stage, a key focal point of the World Equine Expo™, attendees can experience readings and signings with New York Times Best Selling authors, learn from innovators making waves across the equestrian industry, and be entertained by brilliant performances and musical acts. The Coca-Cola® Stage programming will run at 10:00 a.m., 12:00 p.m., 2:00 p.m., and 4:00 p.m. daily.

Mary Alice Monroe’s award-winning novels have been named to many prestigious lists, including the New York Times, USA Today and SIBA. She has received numerous awards, including several Readers’ Choice Awards; the 2014 SC Book Festival Award for Excellence in Writing; the 2015 SW Florida Book Festival Distinguished Author Award; and the RT Lifetime Achievement Award. Most recently, Monroe was named by the South Carolina Academy of Authors as a member of the Literary Hall of Fame. Monroe will speak about the inspiration for her upcoming novel, The Summer Guests, set in the Tryon and Wellington equestrian communities, and the power of story to connect people and the animal world. Guests will receive a gift of the first three chapters of The Summer Guests. A portion of the proceeds from pre-orders during WEG will benefit Brooke USA, sister organization to Brooke, the Official Charity of the FEI World Equestrian Games™ Tryon 2018.

George H. Morris, former Chef d’Equipe of the U.S. Show Jumping Team, renowned rider, coach, clinician, and author, will present an inside look at the international equestrian industry from the 1950s to present day, including a special emphasis on the rich equestrian legacy of the Tryon region. Join Morris throughout both weeks of the World Equine Expo™ as he shares stories about significant equestrian events, answers questions about riding, competition and horsemanship then and now.

Week one attendees will have the chance to learn from United States Dressage Federation Bronze, Silver, and Gold Medalist Jessica Jo (J. J.) Tate, as she presents “What the Heck is Horse Ballet” and explains the ins-and-outs of the intricate and beautiful discipline of Dressage. Tate has competed at the top level of the sport around the world, and her presentation will be both entertaining and educational, whether attendees are completely new to Dressage or a seasoned competitor.

Veterinarian and zoologist Dr. David Jones is an adventurer and world traveler with a passion for wildlife and equines who will present “Tales of Tails and Toenails from This Year’s ‘Equine Industry Vision Award-Winner.'” The former director of the North Carolina Zoological Park and CEO of the Zoological Society of London, Jones has spent his 45-year career in the wildlife and zoo management fields, chasing his passion across 50 countries. He is also the chairman of the world’s largest international equine welfare charity, Brooke, the official charity of the FEI World Equestrian Games™ Tryon 2018. David currently chairs Brooke USA and is the founder and chairman of “Wild Welfare,” which seeks to improve animal welfare in zoos needing assistance in their husbandry and management. His stories from around the world can be heard from September 19-21.

Petra Ingram, CEO of Brooke, the world’s largest international equine welfare charity, will speak on the connection and love between horse and riders and educate about Brooke’s efforts to lift both horses and humans out of poverty in developing nations around the world.

British Olympic Gold Medalist in Eventing and Lady-In-Waiting to HRH The Princess Royal Jane Holderness-Roddam will discuss her amazing career in Eventing, including competing at the age of six at Madison Square Garden and share her stories of the abiding relationship between the Royals and horses, from the rural paddocks of England to the grounds of Buckingham Palace.

Leslie Munsell, Founder of Beauty for Real, has been described as a makeup maverick, innovator, trend forecaster, educator and entrepreneur. With 25 years’ experience as a celebrity makeup artist, Leslie has worked with the biggest talents in the advertising and fashion worlds. Now, in her crowning role as the creator of Beauty for Real cosmetics, Munsell will demonstrate the use of her cruelty-free cosmetics. As a lifelong Dressage rider, Munsell will also explain why her cosmetics are perfectly formulated for equestrians and how proceeds improve the welfare of horses, donkeys, and mules around the world through Brooke USA. Munsell will be on-site for both weeks of the World Equine Expo™.

To learn more about the World Equine Expo™ and preview schedules, click here.