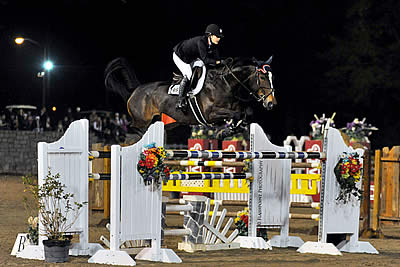 Frances Land and her own Vieanne sail over an oxer in the Olympic Arena to win the $45,000 EMO Grand Prix. Flashpoint Photography.

Frances Land and Vieanne victorious in the $45,000 EMO Grand Prix

Frances Land of Alpharetta, Georgia and her own Vieanne bested 22 horse and rider combinations when they turned in a double clean round Saturday night to claim the victory in the $45,000 EMO Grand Prix.

Only five went clean in the class and qualified for the jump off.  Bryn Sadler of Santa Fe, New Mexico riding Bon Giorno, owned by Showcase 81, LLC, was the first to go clean in the class, beating the set time of 92 seconds with her own 87.398 seconds.  As the first to go in the jump-off, the pair had a rail at the second fence and with four faults and a time of 46.601 seconds, finished in fourth overall.

Sarah Segal of Flemington, New Jersey in the irons aboard Ubris, owned by Chartwell, had a clean, first round effort in a time of 88.513 seconds and was the next to join the jump off.  After posting another clean round in a time of 42.655 seconds, the pair set the time to beat.  But the lead was short-lived after Paulo Santana of Wellington, Florida and Santana Stables, LLC’s Atanja edged Segal out with a clean round in a time of 41.477 seconds.  Segal and Ubris would finish in third, while Santana and Atanja would finish in second place.

Timothy Maddrix of Birmingham, Alabama riding KT Cher, owned by Claudia Styslinger, was the next to go after posting a clean first round effort in 86.419 seconds.  But after a rail down at the second to last fence and a time of 46.642 seconds, Maddrix and KT Cher would settle for fifth overall.

Land and Vieanne were in the enviable last to go position and their clean second round in a time of 41.370 seconds would beat Santana’s time by a little more than a second, rocketing Land and her Vieanne to the winner’s circle.

Life is Good for the winner of the $10,000 USHJA International Hunter Derby

Timothy Maddrix of Birmingham, Alabama and Life is Good, owned by Mary Elise Nolan, won the blue ribbon in the $10,000 USHJA International Hunter Derby, trumping eleven other horse and rider teams. The pair had a first round score of 173 and a second round score of 189 totaling 360 which put the blue ribbon in his hands and the champion sash on Life is Good.  “The course was set up nice and it’s always so beautiful in that arena,” said Maddrix.  “The two stride to a bending line right at the in-gate was challenging. I even had a rail down with Eloise [his second mount] in our second round,” he said, “but Life is Good is very careful.”

“His barn name is Erwin, but I call him Erwinner,” he laughed. “We bought him in Gulfport last winter and so we’ve had him about nine months.  He jumps amazing and is the most fun horse in the barn,” he said.  The pair will showing at the Gulf Coast Winter Classic this winter.

Ian Silitch of Ocala, Florida rode his own Marlon to a second place finish with a first round score of 162 and a second round score of 178 totaling 340 total points.  Laurel Blakemore’s Lion, also ridden by Siltch, won third place honors with a score of 128 and 176, respectively, totaling 304 points for the third place position.

David Jennings of Franklin, Tennessee is no stranger to the Classic Company’s Open Jumper Welcome Class’s winner’s circle and after winning with Billy the Kid last week, rode Short’s Contino 46 to victory after Thursday’s $5,000 Open Jumper Welcome Class under the lights in the Olympic Arena.  The pair bested thirty other horse and rider combinations and triumphed with back to back fault free rounds in times of 75.980 seconds and 32.048 seconds, respectively.

Stay tuned for more results from the Atlanta Fall Classics!

There is always something for everyone at Classic Company shows and the upcoming Gulf Coast Classic shows are no exception.  The Pensacola Horse Shows kick off for three consecutive weeks of AA show jumping action in Pensacola, Florida starting January 8.  Then, work your way up the Mississippi Gulf Coast and show at the Harrison County Fairgrounds in Gulfport this winter.  With more than a million up for grabs, permanent barns with 400 stalls adjacent to the hunter arenas, permanent, complimentary riders’ lounges and the beautiful Mississippi Gulf Coast, be part of the good times that roll at the Mississippi Gulf Coast Classic all winter!  You’ll say ‘let’s go for the show and stay for the fun!’  Come and enjoy Gulf Coast Classic Company’s world class customer service, beautifully decorated rings, big prize money, great events and fun for all!  Email Jonathan at jonathan@classiccompany.com or call the office at 843.768.5503.  Remember, you can also sign up for the Pensacola and Gulf Coast Winter Classics by visiting the Classic Company’s Official Service Partner, Equestrian Connect.

Anyone who has shown with the Classic Company knows what sets them apart from the rest:  Classic Shows are FUN!  Complimentary exhibitor parties, luncheons, Saturday pizzas and the friendliest show management team anywhere work hard to make your showing experience the best. Classic Company never charges an add or scratch fee for those last minute changes and there is no office surcharge added for credit card payments. The Classic Company is a USHJA’s Members Choice Award winner, recognized for producing top quality show jumping events in the United States.  For more information on the Classic Company, the Gulf Coast Winter Classics, the Southeast Medal Finals and their exhibitor-friendly, top quality hunter jumper events, please visit them at classiccompany.com or call them at 843-768-5503.  All sponsorship, marketing and press inquiries should be directed to Lisa Engel, Sponsorship, Marketing and Public Relations Director, at lisa@classiccompany.com.