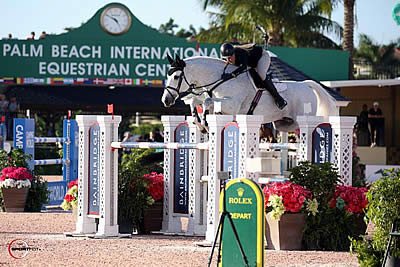 Wellington, FL — February 23, 2018`— In the $35,000 Bainbridge 1.45m Jumpers CSI 5*, 64 entries in the class competed over a speed course designed by Anthony D’Ambrosio of Red Hook, NY. There were 12 clear rounds, and the fastest of those was Kristen Vanderveen (USA) on Bull Run’s Faustino de Tili, a 13-year-old Belgian Warmblood stallion by Berlin x Darco owned by Bull Run Jumpers Five LLC, in 63.88 seconds.

There were 78 entries in the competitive 1.45m class for the two-star division, the $35,000 The Dutta Corp. in association with Guido Klatte 1.45 Jumpers. Musa and Sharapova Imperio Egipicio, a 15-year-old Brazilian-bred mare by Baloubet du Rouet owned by Daniel Aguiar Morelli, were the fastest in the jump-off over a course designed by Anthony D’Ambrosio.

Sharapova Imperio Egipicio has had success in Brazil in their national championships, and this is Musa’s first time competing at the Winter Equestrian Festival. He scored a win just last week with Biscayo in the $35,000 Hollow Creek Farm 1.50m Classic.

After acquiring the ride for week seven of WEF, Gorin-Byrne and the nine-year-old grey Oldenburg mare, owned by Elite Equines LLC, claimed a second and third over fences, as well as seventh in both the under saddle and an over fences, to take the division’s top honor.