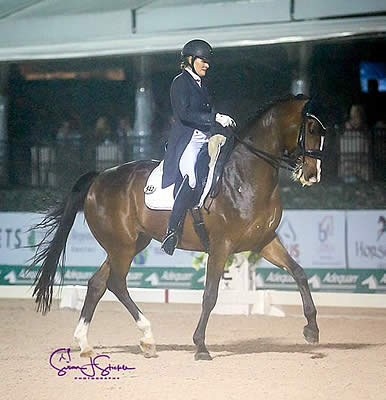 Holzer’s student, Canada’s Brittany Fraser, finished second on All In, with local rider Shelly Francis and Doktor slotting into third. The class was dogged by increasingly heavy rain, with last-drawn Holzer bearing the brunt of the weather.

Although Havanna, by Hochadel, is only 11, Holzer kept some elements of the freestyle floorplan fairly simple, but still produced 19 one-time changes on a straight line, a half pirouette into extended canter, and finished with a flourishing passage zig-zag.

“We’re so lucky to have horses who work so hard for us even when the weather conditions are bad,” said Holzer, 54. “Luckily the footing here is so good; you can still give it gas, no matter how wet it is.”

Holzer, who found her music by googling “emotional uplifting music” which Tamara Williamson then crafted to fit the floorplan, continued: “The best thing about tonight was that Havanna came out after a strong performance last night and she again tried her hardest. Thomas [Baur, AGDF director of sport] saw her a year ago and told me she’d do it — and he was right. She’s a good egg and she tries her hardest; every time I ask her to try harder, she says, ‘OK’. It’s testament to her incredible upbringing and character.

“I’ve been in this game long enough to be so grateful every time I win,” she added. “We all know you can win one day, and then maybe not the next day. I’m just so excited to be on this mare in such great company.”

Fraser rode her own and Marc-Andre Beaulieu’s 13-year-old All In to 75.85% — their highest ever score at the level. Fraser has had the Tango gelding since he was five, climbing the ranks together, and they have been competing at grand prix for three years.

“He’s a sensitive horse so you’d think the rain would bother him, but he does not care,” said Fraser, 29, who was riding to music by Joost Peters. “I had a little mistake in the twos, but each time I ride the freestyle, I get a higher score so I’m really happy about that. He’s finally saying, ‘OK, I know my job and I know what to do’. He’s trying harder and harder.”

Holzer was quick to praise her pupil’s riding, saying: “That horse has huge gaits and it’s taken a few years to be able to control them. The fact that she can make the collected movements so closed and then go huge in the extensions is really testament to her great riding.”

Francis, who was riding to a Marlene Whitaker soundtrack and floorplan, said: “Doktor felt like he warmed up well and started off good but he doesn’t like the rain; he’s wimpy about that. He’s a fireball and we had a little accident of miscommunication in the twos, but he was really trying. He’s a good little horse and we’ve had a long road together.”

Both American riders are hoping to be on the eight-strong squad making the trip over to Europe to pit themselves against the world’s best riders ahead of selection for the FEI World Equestrian Games in Tryon, North Carolina, in September of this year.

Allyn Mann of circuit title sponsor Adequan® was one of many to praise the AGDF venue, saying: “It’s exciting to be part of this and on the journey. The whole team here does the most wonderful job so that we can all turn up when the conditions are less than ideal and still see some wonderful dressage.”

It’s becoming an extremely familiar sight: Heather Blitz (USA) and Praestemarkens Quatero spearheading the small tour prize-giving, sporting the winner’s rug. And so it was, again, in the Intermediate I CDI3*, presented by Wellington Regional Medical Center, as they led the class of 16 starters, scoring 70.784%. A mistake and an unscheduled flying change coming out of the first pirouette couldn’t knock them off the top spot, so accurate, powerful and consistent was the rest of the test. This victory takes their tally to 10 wins from 11 FEI starts for the nine-year-old Quaterback x Rohdiamant gelding.