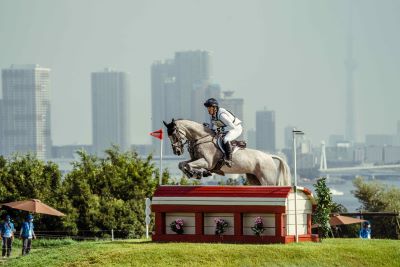 World number one, Great Britain’s Oliver Townend, regained the individual lead he established on the first day of the Dressage phase with a perfect ride on Ballaghmor Class on Cross Country day of Equestrian Eventing at the Olympic Games Tokyo 2020 at Sea Forest. And with foot-perfect performances from team-mates Laura Collett (London 52) and Tom McEwen (Toledo de Kresker), the British team go into the final Jumping phase with four fences in hand over their nearest rivals.

Oozing confidence, and riding at the top of their game, they look unstoppable for gold. But Townend wasn’t taking anything for granted. With the second horse inspection still ahead in the morning, and a course of coloured poles to be tackled later in the day, he voiced a note of caution.

“This is a three-day sport, and you never know what you’ve got until you’re in the ring on the last day,” he said.

His individual lead had been snatched away by Germany’s Michael Jung as the Dressage phase drew to a close, but the double Olympic champion lost his grip on the top spot when triggering the frangible device at the corner element of fence 14, the Lone Tree Moguls, on an otherwise faultless tour of the track with Chipmunk. The German National Federation lodged a protest against the resulting 11 penalties immediately after the cross country, but the protest was dismissed by the Ground Jury.

Compatriot Sandra Auffarth’s gelding, Viamant du Matz, had a glance-off at the final element of fence nine, a left-hand corner that followed a bank out of water for 22.4.

“It came up very quickly at the beginning of course; he was super fresh and I turned a little bit too early to the step,” Auffarth said. “He’s so quick in his turns, and I came too much to the inside of the line and I think he just was not seeing the question at the corner.”

German pathfinder Julia Krajewski made no mistake with Amande de B’Neville, however, and goes into the final phase in silver medal spot. But the German team have dropped from second to sixth and look well out of medal contention.

In stark contrast, both Australia and France enjoyed a superb day with spectacular performances that lifted them into silver and bronze medal spots. Lying sixth after Dressage, the Australians added just the 2.8 time penalties picked up by Kevin McNab and Don Quidam when both Shane Rose (Virgil) and Andrew Hoy (Vassily de Lassos) both kept a clean sheet.

The Sydney 2000 Olympic team gold medallist was grateful for the cooling facilities that kept his 12-year-old gelding safe while they waited on course. “It was excellent because until I got under the tent, I could feel his temperature rising all the time. When you are galloping, you have wind in your face and on your body so you stay very cool. But as soon as you stop you don’t have that, so your temperature rises. Vasilly’s temperature went up half a degree from when it was first taken in the cooling area, but it was still very low and his heart-rate was back to 100. He’s phenomenally fit,” said the man who is competing in his eighth Olympic Games.

The French are defending the Olympic team title, but things hadn’t been going their way until Christopher Six (Totem de Brecey) added just 1.6 time penalties to his scoreline, Nicolas Touzaint (Absolut Gold) was just over the time-allowed of 7.45 minutes to add 0.4, and anchorman Karim Florent Laghouag (Triton Fontaine) was clear inside the time. On a running score of 97.10, they are now just over a single penalty point adrift of the Australians, trailed by New Zealand (104.00) in fourth, USA in fifth (109.40), and Germany in sixth (114.20).

With just their combined Dressage marks of 78.90, however, the British look well in command. Laura Collett lies in bronze medal spot individually after a great round with London 52, and feels the result has confounded her critics.

“I always said he’s a superstar and he just went out and proved to everyone just how good he is. I’m so relieved I did my job and to be selected on this team this year. I know everyone at home will understand this; we’ve had to fight for our place and he’s proved to everybody he well and truly deserved it, and I can’t tell you how proud I am of him!” she said.

The margins are small on the Individual leaderboard, however. Townend’s 23.60 leaves him just two penalty points ahead of Krajewski, and Collett is only 0.2 further adrift, with New Zealand’s Tim Price (Vitali) snapping at her heels carrying 26.80. Japan’s Kazuma Tomoto (Vinci de la Vigne) is on 27.50 and the third British team-member Tom McEwen on 28.90, only fractionally ahead of Australia’s Hoy in seventh spot.

60 horse-and-athlete combinations started in the Cross-Country phase of Eventing.

2 Retired and 9 were Eliminated.

Sara Algotsson was announced as replacement for Ludwig Svennerstal on the Swedish team before the cross-country phase, but withdrew when the team was no longer viable due to elimination for Therese Viklund after a fall from Viscera at fence 18B.

The most influential obstacle on the 23-fence course was 14C, a left-handed corner that followed a large oxer, where there were two refusals and the frangible device was triggered seven times.

Oliver Townend (GBR): “Once I got into the course, I started to pick up very good quick fast distances, almost racing distances, to the straightforward fences and he answered beautifully.

“The earlier distances didn’t happen quite the way I imagined, like the first two waters; having said that, they were very comfortable distances, and I have a lot of trust in Derek di Grazia’s courses. I think the man is one of, if not the best in the world in what he’s doing, and even when I think a distance is going to be a certain way, I know even if it isn’t it’s going to be a safe distance.”

Michael Jung (GER): “I’m very happy; he was very good. I had a little mistake there (at fence 14). I didn’t realise it fell down, but when I galloped away from the fence, I heard the sound. It was quite a surprise for me. Everything else was really nice.”

Tim Price NZL, when asked what the course felt like: “It felt fast and furious, with lots of big jumps just around the corner! They come up the hill and even though they’ve warmed up over some fences, it sort of dawns on them that it’s actually another cross country day and not another training day, and it looks like it’s a fairly seriously day at the office and they have to absorb all that in about two minutes. Particularly on a young horse, you want to get them out on the track and let them find themselves, the rhythm, the breathing, the jump, the scope, and out here you don’t have time to give them an easy couple of minutes, so it’s asking quite a lot of a young horse.”

Andrew Hoy AUS: “As those that have seen Vassily run before, he’s just the most phenomenal horse cross-country. I had a really nice ride: up until the time I was stopped, it was really good, just fingertips, and I ride him in the same bridle and bit in all three phases; he’s just so on the ball and so focused.”