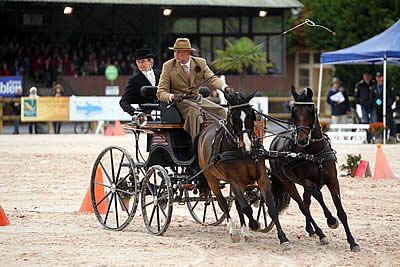 Ewoud Boom on his way to victory in the pairs category of the FEI World Driving Championships for Combined Ponies. © Marie de Ronde/FEI.

Pau (FRA), 5 November 2013 – The sixth edition of the FEI World Driving Championships for Combined Ponies in Pau, France, will be remembered a successful one. Young and talented drivers as well as experienced athletes took home the individual medals. Bram Chardon (NED) defended successfully his title and won individual gold for the second consecutive time in the four-in-hand class. His compatriot Ewoud Boom won gold for the first time in his career in the pairs category and reigning European Junior champion Martin Hölle (HUN) is the new world champion in the pony singles. The Netherlands won the team title for the first time in the 10-year history of the combined championships and broke the German dominance which had lasted throughout the first five editions of the event.

Young Hungarian driver Martin Hölle, 16, finished second in dressage driving his German riding pony Apache de la Licorne and lay the base for his gold medal. He was also second in the marathon behind Sebastien Pallen (BEL) whose pony he bought two years ago. Hölle was in gold medal position even before the cones competition began. Once on the cones course, he drove a steady round crossing the finish line with only 0,27 penalty points to his name and securing his first world title.

The 22-year-old Rosanna Walters-Symons (GBR) won the silver medal with her 16-year-old Welsh Cob Dabernon Tiger Woods, with which she won bronze at the European Driving Championships for Young Drivers 2012. Walters-Symons, who is a PhD student at Exeter University in the United Kingdom, finished in fifth place in the dressage and the marathon and moved up to the silver medal thanks to a wonderful cones round.

Just like Martin Hölle and Rosanna Walters-Symons, 47-year-old bronze medallist Els Broekman (NED) also drove her first World Championship in Pau with her 14-year-old New Forest gelding Aron. She won the dressage and was able to keep her leading position throughout the event.

Dutch driver Ewoud Boom, 36, who has competed in every World Championship for Combined Ponies since the event was launched in 2003, succeeded in winning an individual medal. Boom won the dressage, finished third in the marathon and secured his first gold medal after an excellent performance in the cones, in which he scored the only double clear round. Marco Freund (GER), 17, who had finished in fourth place at the previous world championships in 2011, landed a much deserved slot on the podium this year. Marco, who is the son of double world champion four-in-hand driver Michael Freund, came third in the dressage and second in the marathon. He secured his silver medal by driving a clear round with only a few time penalties.

Great Britain’s experienced Anna Grayston, who has competed at many European four-in-hand and World Combined Championships, was delighted to take home the bronze medal. The 41-year-old former four-in-hand pony driver drove her pair of good-looking Welsh ponies to fourth place in dressage and moved up to third after a strong marathon performance. Anna had two knockdowns and some time penalties in the cones, but was able to secure the first individual medal in her career.

Defending World Champion Bram Chardon, the 20-year-old son of four-time world four-in-hand champion IJsbrand Chardon, won all three competition phases, leaving his opponents far behind him. With his experienced team of grey Welsh ponies, he drove a wonderful dressage test, set fast times in the marathon obstacles, designed by Swiss O-course designer Christian Iseli, and was the best driver in the cones. Even though Chardon had a big advantage before entering the cones arena, he still drove to win and secured his second individual gold medal with an amazing performance, much to the joy of the many orange-clad Dutch fans.

The silver medal went to Jozsef Dobrovitz Jr (HUN) who made up for his disappointing results in 2011. The 21-year-old driver, who is also one of the 10 drivers qualified for the FEI World Cup Driving, finished fourth in the dressage and in the marathon and was in bronze medal position before the cones. Dobrovitz drove an amazing double clear round and after Dutch driver Jan de Boer, who was in runner-up position going into the final phase, had too many penalty points in the cones, the Hungarian moved up to win the silver. Double world champion Tobias Bücker (GER) took home the bronze medal. The 38-year-old salesman by profession has competed in every World Combined Championships as well as the European four-in-hand pony championships.

The Dutch drivers got off to a flying start winning the dressage in each class. The Dutch team held on to their leading position throughout the event gradually widening the gap with their opponents. The final obstacle driving competition resulted in a Dutch winner in each class. The German team performed very well too but did not manage to successfully defend its title. The Hungarian team members, whose average age was 22, 22 finished on third place.

Martin Hölle (HUN), singles champion: “I’ve had this pony for two years now and I have been training very hard for this world championship, which is far more difficult than the youth championships. In the marathon I managed to drive according to plan. Before I went into the cones I knew I had an advantage of two balls, which gave me the confidence I needed. My pony went well in all three competition phases and I will for sure keep driving him for the next two years.”

Ewoud Boom (NED), pairs champion: “I am so happy with this medal, it finally all came together! My dressage went well and I know I can drive a better marathon than I did here, but my third place was good for my overall result. I started off at a good speed in the cones and managed to keep the speed up while making short turns. We trained extensively for the obstacle driving and it has all paid off now. I am not sure what the next two years hold for me. I have driven a pony from another owner the past one and a half years and the pony is going back next week, so I have to see what the future will bring me.”

Bram Chardon (NED), four-in-hand champion: “I am very proud of my second gold medal. My ponies did a fantastic job. My goal after Lipica 2011 was to improve my dressage by 10 points and I succeeded. The marathon went really well for me and so did the cones. I knew I had a big advantage but I also realised that the competition is over only after you’ve crossed the finishing line. I am not sure yet what I will do next. I would like to start driving a team of horses, but my father competes at the top and to have two horse teams is a lot of work. I would also very much like to defend my title at the next world championships at Breda in 2015, so I will see.”

Lexington, KY – Suzy Stafford (Wilmington, DE) represented the U.S. at the 2011 FEI World Driving Championships for Combined Ponies in Lipica, Slovenia held September 21-25, 2011. She drove her Morgan-Arabian Cross mare Josephine to an impressive finish in the cones phase and was awarded the Bronze medal in the Singles Pony Championship. Stafford has been notified by the FEI that the Swedish single pony driver Susanne Ankermark driving Windy Boy Rocket has been disqualified. The results of the competition have been updated, now awarding Stafford and Josephine the Silver medal, adding to her already remarkable resume.

END_OF_DOCUMENT_TOKEN_TO_BE_REPLACED

Lipica (SLO), 21-25 September 2011 – Three new world champions were crowned at the end of four wonderful days of competition at the FEI World Driving Championships for Combined Ponies in Lipica, Slovenia. Bram Chardon from The Netherlands won gold in the four-in-hand pony class, Dieter Baackmann from Germany was declared world champion in the pony pairs class and Kristina Klindt from Denmark is the new world champion in the pony singles class. Germany was untouchable from the very beginning and took the team gold.

New generation
Young drivers took the medals this weekend just as was the case a month ago at the FEI World Pairs Driving Championships in Conty (FRA). A new generation of drivers has successfully entered combined pony Driving at the highest level. With 18-year-old Bram Chardon and 23-year-old Kristina Klindt winning the gold medals and many other young drivers taking the top placings, the future of pony Driving is looking bright indeed.

Four-in-hands
Bram Chardon (NED) is following in his father’s footsteps. This was the championship debut for the son of four-time world four-in-hand champion IJsbrand Chardon. It did not come easy for Bram though. After placing fifth in Dressage, he won the marathon by driving his team of grey Welsh ponies fast and smooth through the eight spectacular marathon obstacles. Bram took over the lead from Germany’s defending world champion Tobias Bücker who had won the Dressage. Bram had one ball in hand going into the final obstacle driving competition but proved to be a true champion and drove a magnificent double clear round, securing his first ever gold medal. Bram’s fellow team member and 2007 world champion Jan de Boer won individual silver and the 2009 world pony pair champion Daniel Schneiders (GER) made an excellent debut in the four-in-hand category by winning the bronze.

END_OF_DOCUMENT_TOKEN_TO_BE_REPLACED

Lausanne (SUI), 20 September 2011 – From 21 to 25 September, the Lipica Stud Farm in Slovenia will host the fifth edition of the FEI World Driving Championships for Combined Ponies. Seventy-seven drivers from 17 nations will compete in the singles, pairs and four-in-hand classes.

There will be six teams, each consisting of a minimum of one and a maximum of two drivers per class and per nation, fighting for the medals. Title defender Germany and silver medallist The Netherlands are tipped as the favourites for the nations competition.

The Driven Dressage and Cones Competitions will be held in the main stadium. Swiss FEI O-course designer Christian Iseli, who is well-known for his work at world championships, has built eight beautiful obstacles located close to each other in the fields of the Lipica Stud Farm. For the first time the Marathon will include a cool down section where the ponies will be given a few moments of rest after they complete the course and before the compulsory veterinary inspection.