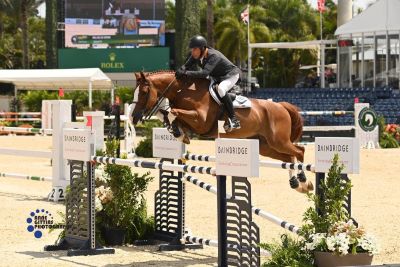 Wellington, FL – April 11, 2021 – The first week of the 2021 ESP Spring Series took place April 7-11 at the Palm Beach International Equestrian Center (PBIEC), with Sunday’s action capping off the first week of National competition following the Winter Equestrian Festival. Concluding the first of five installments of the Spring Series as the week’s big winner, Germany’s Wilhelm Genn and Bugatti celebrated victory in the $35,000 ProElite Spring I Grand Prix after beating a small three-horse field in the jump-off.

The hunters stole the spotlight on Friday in the $10,000 USHJA National Hunter Derby, presented by Equiline, that took place in the E. R. Mische Grand Hunter Ring. Eighteen horse-and-rider pairs tested the classic round course set by Danny Moore of Spring Hill, FL with 12 returning for the handy round. Eighth in the order, Ellen Toon of South Salem, NY and Gabriel set the bar high after receiving a score of 95 that put them in the lead going into the second round, and then received a handy-phase score of 88 to secure the victory with a total score of 183.

“I have had Gabriel for four years now and this has definitely been his best year. He is very scopey and fearless,” Toon commented on the gelding owned by JT Farm. “He’s shown in the professional divisions as well as the amateur divisions with me and we have had the absolute pleasure of Victoria Colvin taking over the professional ride on him. She has done a handful of International Derbies and has placed high in all of them. Everyone has done an amazing job with him. Today was only his fourth derby!”

SAUGERTIES, NY (July 22, 2012) – With a win in Saturday’s $5,000 Devoucoux Hunter Prix at HITS Saugerties, Ellen Toon and her own Invincible picked up their fifth qualifying class and are on their way to HITS Championship Weekend for their second appearance in the Diamond Mills $500,000 Hunter Prix Final.

“I was a little rusty coming into this class,” admitted Toon of South Salem, New York. “But, he [Invincible] is such a seasoned and enthusiastic competitor, he always makes me feel more confident. As soon as he picked up a canter in the ring, I knew we were going to have a good day.”

“Jumping off the bank was really nice and made for a fun first round,” said Toon. “The footing in this new ring gets better and better each week.”