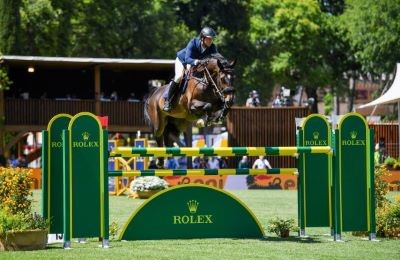 Geneva, 18 May 2022 – The world’s elite show jumpers will gather in the magnificent gardens of Villa Borghese from 26-29 May to contest the 89th edition of the CSIO Roma Piazza di Siena. Staged in the heart of the Italian capital, the five-day event will feature some of the world’s finest horse and rider combinations and culminate on the Sunday with the 5* Rolex Gran Premio.

The CSIO Roma Piazza di Siena is steeped in history and tradition, having first been staged at this beautiful venue in 1926. In 2018, the 18th century oval was re-grassed, returning it to its original splendour. The organizers have strived for continuous improvement, ensuring the event’s stature as one of the most revered in the equestrian calendar.

Switzerland’s World No. 2 Martin Fuchs will be aiming to emulate his uncle Markus Fuchs, who won the Grand Prix here in 2001. He will face stiff competition from compatriot Steve Guerdat, with whom Fuchs won team gold at the 2021 FEI European Championships. Both riders won Rolex Majors last year – at the CSIO Spruce Meadows ‘Masters’ Tournament and the CHI Geneva, respectively – and appreciate the horsemanship, precision, and refinement required to win in Rome.

Looking ahead to the show, Fuchs said: “The CSIO Roma Piazza Di Siena is always one of my favourite events of the year. It is so magical to compete in such an amazing setting right in the centre of the city. With it being a Rolex show, you know the standard will be high and that you will face the toughest competition in the world, which always pushes riders to perform at their best.”

Bertram Allen, part of the Rolex New Guard, will be striving to become the first Irishman in 13 years to win this prestigious Grand Prix, along with in-form Kevin Staut and Scott Brash, the only rider to have claimed the Rolex Grand Slam of Show Jumping. 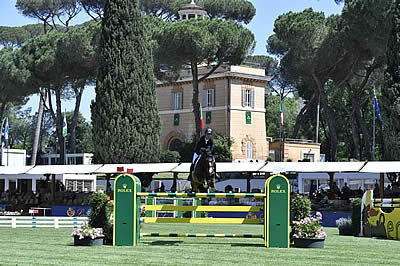 Geneva, Switzerland, 20 May 2019 – The world’s elite show jumping riders will be welcomed to the prestigious Piazza di Siena in the Eternal City of Rome from 23-26 May to contest the Rolex Grand Prix. A marvel of landscape architecture, this famous setting will play host to four days of intense competition.

The CSIO Roma Piazza di Siena, set in the stunning gardens of the Villa Borghese in the heart of the Italian capital, is widely regarded as one of the sport’s most beautiful venues. Steeped in equestrian history, this will be the 87th edition of the Rome showpiece, the first taking place at the venue 90 years ago in 1929. In 2018, the 18th century oval was re-grassed, returning it to its original splendour. Last year also heralded a new chapter in the show’s distinguished history as Rolex became the Official Timekeeper.

For more than 60 years Rolex has been a dedicated supporter of equestrianism in a privileged relationship that permeates all levels of the sport. The Swiss watch manufacturer not only partners with all four Majors – The Dutch Masters, CHIO Aachen, the CSIO Spruce Meadows ‘Masters’, and the CHI Geneva – but with other innovative and prestigious competitions, including the CSIO Roma.

CONTENDING ROLEX TESTIMONEES
Course designer for the CSIO Roma since 2000, Uliano Vezzani is renowned for his tough Grand Prix layouts, and competitors can expect it, as always, to be meticulously planned and supremely challenging, requiring precision and boldness.

Switzerland’s Steve Guerdat, who has held the World No. 1 ranking for five consecutive months, will pose a strong threat to fellow Testimonee, Kent Farrington. Always a force to be reckoned with, USA’s Kent Farrington is on fine form, as displayed by his recent fifth-place finish in the Rolex Grand Prix at CHI Royal Windsor Horse Show. “Being able to compete in the city of Rome is a setting like no other, making both a beautiful place and a historical venue for our sport. My horses are feeling good so hopefully we can be at our best for the competition,” Farrington said.

Competing alongside his fellow Rolex Testimonees will be Great Britain’s Scott Brash. An equestrian phenomenon, Brash is the only rider to have lifted the coveted Rolex Grand Slam of Show Jumping trophy for winning three consecutive Grands Prix at the Major events. World No. 5 Martin Fuchs, a member of the Rolex New Guard, will also have the opportunity to showcase his burgeoning talent. Completing the roster of Rolex Testimonees will be France’s Kevin Staut, team gold medallist at the 2016 Rio Olympic Games and Dutch rider Jeroen Dubbeldam, who has won individual Olympic (Sydney 2000), World (Caen 2014) and European (Aachen 2015) titles.