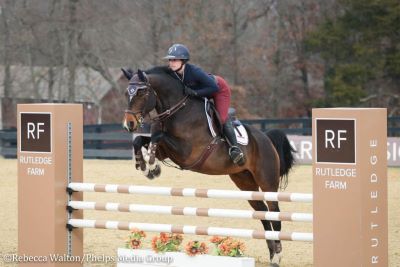 Middleburg, Va. – Nov. 23, 2020 – To close out the 2020 season, Rutledge Farm welcomed Olympic medalist Anne Kursinski Saturday, Nov. 21 to host an exclusive one-day clinic as a part of the Rutledge Farm Sessions clinic series. Kursinski brought decades of experience with her, including five Olympic show jumping campaigns that earned her two team silver medals. Welcoming riders from all skill levels to the picturesque property in Middleburg, Virginia, Kursinski brought riders back to the basics on the flat and over fences, including dropping their stirrups, mastering the automatic release and building a stronger awareness of how they work with their horses.

Kursinski commented, “I have been teaching for a long time, so it is about quickly finding the riders’ weaknesses to give them some tools and exercises that can help with their awareness. I think that is so important. In our short amount of time, my goal is to get them to try to change something or improve something and it’s rewarding when they feel more confident afterwards by having a few new tools to take home.”

Four groups and a total of 18 riders traveled to Rutledge Farm to learn from Kursinski’s vast experience. In the spirit of “No Stirrup November,” Kursinski asked riders to drop their stirrups on the flat in order to build a strong foundation for the exercises to follow. Riders were also asked to knot their reins for a portion of the flatwork, a tool Kursinski utilizes to build awareness and encourage quick corrections. Over fences, riders practiced with driving reins and an automatic release to learn body control and work in sync with their horses.

Amber Ide commented on her experience, saying, “I’ve only owned my horse for one week, but I feel like a lot of the exercises we did, like halting and having them listen on the back side, really helped me get to know him better. It’s a really awesome opportunity to ride with Anne Kursinski, and this facility is gorgeous. There is so much land, the footing is great, the jumps are great, and it’s really an awesome facility to have a clinic like this.”

“Rutledge Farm is a fabulous, beautiful facility,” Kursinski added. “And of course, Aleco [Bravo-Greenberg] is so enthusiastic in wanting to share the education with people and that is wonderful in our business to have somebody like that. It’s fabulous to help riders become better horsemen and to be better for the horses. To me education is about the riders, but it is really about how the riders are improving with their horses and making their lives better.”

For more information about the Rutledge Farm Sessions, click here. 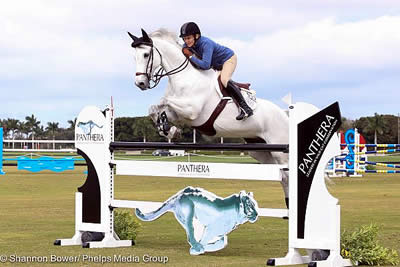 Wellington, FL – February 18, 2015 – Today Anne Kursinski illustrated once again why she is one of the most successful show jumpers in the United States, claiming the top prize today aboard Hay’s Investment Corporation’s MTM Motto in the first 1.30-1.35m jumper class at The Ridge at Wellington’s Turf Tour. The weather started out a bit less than ideal Wednesday morning, but that didn’t stop several of Wellington’s top competitors from trying their hand at Nick Granat’s courses in between the rain drops. As the afternoon progressed and the sun brightened everyone’s day, competitors flocked to the pristine polo fields of the International Polo Club (IPC) Palm Beach.

Anne Kursinski posted a very fast time of 39.071 to win the first 1.30-1.35m class with MTM Motto. Despite being only the third pair to go double clear, Kursinski and the grey gelding blazed around in a time that held for the entirety of the day against a field of 31. Nina Fagerstrom did her best to claim the top prize in both classes, but fell just short by stopping the clock at 39.173, a mere tenth of a second off of the leader. Jeffery Welles was the second double clear of the day, and finished in third with a time of 39.660 aboard Calais.

Kursinski was extremely impressed with the footing at IPC. “Going early this morning, I was hoping that it would be good, but it was perfect! It was amazing; the polo crew knows how to take care of the ground. I had the same studs in that I used in the sunshine and I didn’t even go any bigger because the footing is so good. I went quite fast and never even thought of slipping. When I first got here I thought we might just train, but it felt good so I thought let’s go fast.”

She continued, “I thought it was a very good course, nice options, and not a giveaway. The horses are definitely going to learn something. You can go good and fast or train, but either way the horses and riders will learn something. It was a wonderful morning and a great way to start the day.”

The second 1.30-1.35m class was won by Nina Fagerstrom, riding Finca Horses Inc.’s Hot Topic. She posted a time of 32.684, nearly two seconds ahead of second place Conor Swail who posted a time of 34.650 on Simba De La Roque. Paul Yanke on Chill Haze stopped the clock in 30.585, but an unfortunate rail down at fence three put him into third place.

Fagerstrom was very complementary of her partner today. “She’s 8 years old; we bought her three and a half years ago from Belgium, and she’s an extremely talented horse. I really think a lot of her. She was second last week in the 1.40m Grand Prix here. I find that she’s developing every week; she’s always learning.”

She continued, “It’s great here! The footing and the jumps are wonderful. The course is just challenging enough for her but not too difficult, and it really teaches the horses with the various turns and tracks you can take.”

The second ring saw a number of talented horse and rider pairs competing throughout the day. Competitors were developing their young horses by providing them with valuable experience on the turf. Michel Ismalun, three star level member of the course design team from World Equestrian Games 2014, a world-renowned course designer and a director for Classic Champions Inc., built the young jumper courses in the adjacent ring to the 1.30-1.35m jumpers. The course proved to be very inviting and educational for each division, allowing the younger horses to go forward and gallop while on the turf.

Friday’s events promise to be exciting, with the $15,000 1.40m Grand Prix running from 8 a.m. until 4:30 p.m. Beginning at 8 a.m., the second ring will have Low Schooling Jumpers, with two classes running simultaneously with open cards until noon. Medium schooling jumpers will kick off at noon with two classes running with open cards until 4:30 p.m.

Week 8 of the Ridge at Wellington’s Turf Tour will also take place at The International Polo Club, located at 3667 120th Avenue South in Wellington, FL 33414. The show entrance will be off 120th Street between Lake Worth Road and Pierson Road. The Ridge would like to thank Dover Saddlery for their support of the 12-week series as the cooler and banner sponsor, and they would also like to announce their most recent jump sponsor, Panthera, the leaders in wild cat conservation.

Show Net will be onsite for both Wednesday and Friday events posting live results, as well as videoing rounds in both rings. For results and videos, please visit www.shownet.biz.