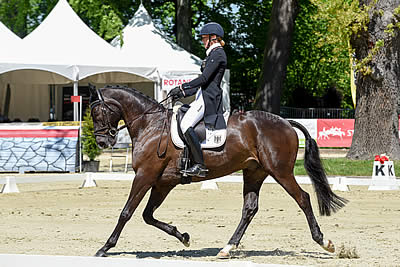 Strzegom, 19.05.2017 – After two days of dressage we were eager to get the speed up here in Strzegom and this is what we all have been waiting for – it’s cross-country time!

Strzegom continues be sensational sunny, warm and to just make it perfect there has been a bit of a breeze all day that made us all hang on to our hats, scarves and caps. Thankfully, the exhibitors have gotten their trade stands opened so if needing a new hat, shirt, jacket or something for the horse, that is now all taken care of. We also had the great opportunity of inviting in children from the schools in the area, setting the ice cream and soft drink vendors in hyper mode sales. Until now the coffee vendors have been the most busy, quite likely do to the coffee consumption from the press office.

Before throwing ourselves into the cross country we still had a bit of dressage to round up – three classes remained.

Taking up where we left off, we started the morning in Arena B with CCI 1* where we had a Swede in the lead overnight. 20 riders went before the Ground Jury and now we have a new leader for the upcoming XC, Julia Gillmaier (POL) in 1st position after a strong dressage, being chased by Sandra Auffarth (GER) and Swedish Therese Viklund (our overnight leader) coming in 3rd. We can look forward to a very exciting XC.

In arena B CCI 2* dressage had 27 riders starting, a nice variety of seasoned riders on a bit younger horses to younger riders starting with more seasoned horses. Quite a mix! The arena B is a neat little arena that allows close access for spectators and it was nice to see some many coming along to cheer on their favorite rider. We ended the day at Arena B with a national favorite and very experienced rider Pawel Spisak in the lead, closely followed by another rider of great expertise Linda Algotsson in 2nd. Alice Naber-Lozeman came in 3rd and with only a few points separating the top 5 it’s really an open race as we head on for the XC.

In the Main Arena it was all about FEI Nations Cup 3* dressage. 6 teams had lined up for the FEI Nations Cup: Germany, Poland, Sweden, The Netherlands, Great Britain and Italy. Strzegom is the 1st leg out of 9 where the best 7 scores will be counted as the final result.

Overall it ended up being a very close race between the teams. All six countries brought similar level of the teams leaving this class open for surprises and the certainly a few came along. The Arena A itself, being wide and open plus adding some distractions, spooked quite a few horses causing a few “blow outs”. Adding a bit of riders’ nerves might have added to the tension so all in all not as many top results as we expected. With that said, we still had some very nice rides; Germany rarely lets you down and it may not come as a surprise to have them in the lead. Coming in for the XC it’s:

On the XC we had two classes starting; first to enter the XC course was the CIC1* and a bit later in the afternoon the CIC2*. Having this amazing weather meant both spectators and riders got superb conditions for the XC.

The courses gave the riders in both 1* and 2* a proper test. Marcin’s courses are known to be technical and the fences come at you quickly. Being a narrow course it’s a challenge to keep, especially the younger and less experienced horses, focused on the task and not having them distracted by all that is going on around them. In both classes, we could see that tension/loss of focus happening especially by the second water complex where the horses had to jump a log into the water followed by two corners directly after the water. That in itself can be tough question without adding the people, other fences, spectators and cameras just opposite the water complex. Some horses got a bit distracted already before jumping into the water resulting in lost balance, rhythm and line. Others ended up in trouble after the first jump into the water as the horses lost speed and didn’t quite get the momentum and balance back. Overall both courses ended up with some very good rides for those who managed to keep their horses in a steady rhythm, focused on the task and keeping a good line towards the fences.

Finishing off the CIC1* we still have the same top three in the lead as after the dressage: Noora Cederberg/Tilda V in 1st, Rebecca-Juana Gerken/Day of Glory 4 2nd, and Janet Wiesner/FST Golden Joy 3rd. The difference between 2nd place and 6th place is fewer than 4 penalties so it’s still very much a fight going into the showjumping.

In CIC2* Kai Rüder seems unstoppable; he has had a flying start so far remaining in the lead with Coin Toss and keeping second ride Charlie Weld in 4th. Merel Blom/The Quizmaster in 2nd and Rebecca-Juana Gerken in 3rd – well done by Rebecca to have two horses in top three in 1* and 2*!

If you cannot make it, don’t worry! You can join Strzegom Horse Trials live via our web site: http://www.strzegomhorsetrials.pl/pl/galeria/strzegom-tv.html.