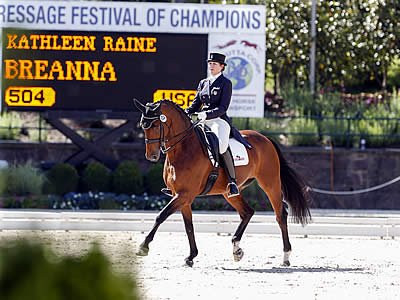 Compiègne, France – The Dutta Corp. U.S. Dressage Team returns to FEI Nations Cup™ CDIO5* Compiègne where they will take on seven teams vying for podium honors May 18-21. Full of Nations Cup veterans, the U.S. team of Shelly Francis, Arlene “Tuny” Page, and Kathleen Raine are poised to challenge the standards in the Grand Prix ring this weekend. Jennifer Hoffmann and XXXL Rubinio NRW have withdrawn for veterinary reasons. Chef d’Equipe Charlotte Bredahl-Baker will lead the team as they compete in the following order:

Kathleen Raine and Breanna:
Raine (Murrieta, Calif.) and Breanna, her own, Jennifer Mason, and David Wightman’s 2000 Hanoverian mare, look to continue their 2017 success after a win in the Burbank World Cup Grand Prix. Most recently, the combination placed third in the Grand Prix and Grand Prix Special CDI3* at the Dressage Affaire in March.

Arlene “Tuny” Page and Woodstock:
Page (Wellington, Fla.) and her own Woodstock bring a wealth of Nations Cup experience to CDIO5* Compiègne. She and the 2003 Dutch Warmblood gelding were part of the team gold-medal efforts during the 2016 Stillpoint Farm FEI Nations Cup.