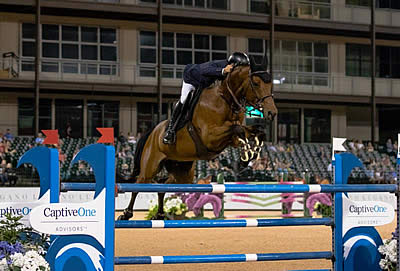 Among 20 entries with only six duos in a thrilling jump-off on the course set by Catsy Cruz (MEX), Lambre revealed, “I saw number one to go – Sharn – and he’s a fast rider and so I had to try and go faster than him. I did my plan and it worked. The first round was a nice course for a 3*; it was technical. The jump-off was really, really good. We were able to make less strides everywhere, so it was a very nice class,” he stated.

On his future plans with Cetano Van Aspergem Z, Lambre remarked, “I am staying three more weeks here [at TIEC] and then we’ll probably go to Spruce Meadows.”