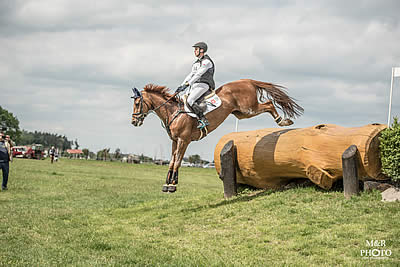 Baborówko, 25 May 2019 — Polish riders have shown to be in great form during the cross-country trials at Baborówko Equestrian Festival. The Polish team are the current leaders in the fight for a qualification for the 2020 Olympic Games in Tokyo.

Paweł Spisak (POL) has kept the lead in the CCIO4*-L after the cross-country trial with Banderas. They were the only pair that finished the difficult test with almost 40 obstacles at the length of 5700 metres within the time allowed. Michael Jung (GER) is second for now with Fischerchipmunk FRH, and third position went to Jan Kamiński (POL) riding Jard.

The CCIO4*-L class doubles as qualifier for the 2020 Olympics in Tokyo. The Polish team’s rivals Russia and Belarus have lost their chance due to the insufficient number of representatives (each team has to have three classified riders). Alexander Zelenko (BLR) was eliminated during dressage, and Hanna Nemtsaya (BLR) has withdrawn from the competition. The Russian team had three pairs during the class (each country was able to enter four), and Aleksandr Markov (RUS) was eliminated during cross-country.

In spite of the lack of competition, the Polish team cannot lose their focus. Mariusz Kleniuk (POL) with Winona has retired from finishing their ride in the cross-country, which means that the Polish team continues with only three riders remaining. Joanna Pawlak with Fantastic Frieda, Paweł Spisak with Banderas, and Paweł Warszawski with Aristo A-Z have to pass the vet check and finish the demanding showjumping course, which will surely stand a challenge for horses tired after the long cross country.

In the CCI4*-S, with the highest prize pool at the event (325 000 PLN), the current leader is Andreas Dibowski (GER) with FRH Butts Avedon. Andreas Ostholt (GER) is right behind him after cross country with Corvette 31, and third position is currently held by Michael Jung (GER) with Highlighter. The highest ranked Polish athlete for now is Mateusz Kiempa (POL) with Lassban Radovix (9th position).

The current best score after cross-country in the CCI3*-S belongs to Jan Kamiński (POL) with Senior, and Ksawery Śniegucki (POL) is second with Rarashek. Third place for now goes to Johan Lundin (SWE) riding Zuma.

The CCI2*-S class has ended, with no changes in the leaderboard. First place went to Vanessa Bolting (GER) with Ready To Go W, second was Leoni Kuhlmann (GER) with Hidalgo 179, and Julia Gillmaier (POL) with Red Sunrise 2 took home the third place.

The cross-country trial was the last one in the CCIYH2*-S, for six-year-old horses. Miloslav Prihoda Jr (CZE) won the class with the Polish-bred Eldorado, second place went to Sabrina Labes (GER) with Sparta’s Prince, and third went to Rebecca-Juana Gerken (GER) with Fame 227.

At the hardest and most demanding classes of the show, the CCIO4*-L, CCIO4*-S, and CCIO3*-S, The athletes will compete for the record-breaking prize pool (even bigger than last year’s record). Thanks to the support of the Patron of the event, Mr Roman Roszkiewicz. the collective prize pool in the international classes will reach 465 000 PLN. The CCIO4*-L the prize money will be as high as 85 000 PLN, 60 000 PLN of which will go to the three best teams in the class. The biggest prize is to be won in the CCI4*-S class, 100 000 PLN, with the collective prize pool in the class being 325 000 PLN.