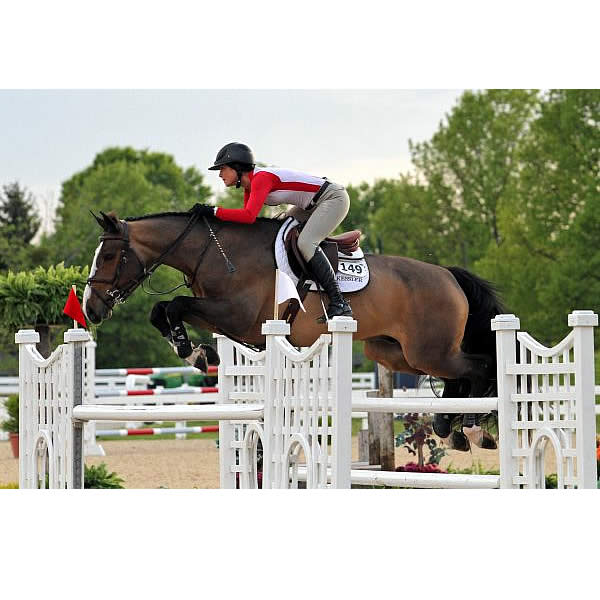 Lexington, KY – May 8, 2013 – The top horses and riders from across the country have returned to the Kentucky Horse Park this week for the start of the Kentucky Spring Horse Shows. The first day of competition kicked off with the Open Jumper divisions in the Rolex Stadium. Olympian Reed Kessler led the way in the 1.45m Open Jumper class aboard Mika with a double clear effort, while the victory in the 1.40m Open Jumper speed class went to Pablo Barrios riding Colgate.

Reed Kessler of Lexington, KY, was the pathfinder and set the bar with her veteran mount Mika. Pushing her mount to open his stride and cut the turns, the duo dashed through the timers in 34.438 seconds. Their clear round was a full three seconds faster than the runner up to take home the top prize.

Canada’s Ian Millar was the next to challenge the young rider’s time with Baranns, owned by The Baranns Group of Perth, Ontario. They also managed to leave all the rails in place, but a time of 37.804 would only be good enough for third. The next pair on course, Hillary Simpson and Nopus Du Gue Joubert, owned by Quiet Hill Farm of Ocala, FL, bested Millar’s time. The pair left all the fences intact, but clocked in a 37.560 seconds to slide into the second place position. The only other duo to complete a double clear round was Andrew Bourns of Wellington, FL, riding Ace High Mike. Stopping the clock at 38.929 earned them the fourth place ribbon.

“Mika was great today,” smiled Kessler. “The horses that didn’t come to Europe with have been hanging out at home and enjoying our big grass property, they haven’t been doing much jumping at all. I am really happy that everyone was so good on the first day back.”

Kessler continued, “Mika is not such a speedster; going fast kind of undoes him, but he’s 13 this year, and I’ve gone clear in so many grand prixs that it’s time to go in and be the fastest. This is a national show, so it’s a good time to practice all week pushing him outside his comfort zone. I love this show. It’s a really nice time, and the horses have had a break after Florida. You can start back up again, and it’s a great building block before heading to Spruce Meadows.”

Kessler just returned from the 2013 Rolex FEI Show Jumping World Cup Finals, and she used the experience there to help prepare for this week. “Normally the speed is very tricky for Mika,” she explained. “I set the World Cup Finals speed course up at home just as little jumps and rails on the ground last week, and tried to do the fastest numbers with him. I really did go home and practice, so doing a normal speed class seemed easier today.”

Just prior to their win, Kessler and Mika were bested by Venezuela’s Pablo Barrios and Colgate during the 1.40m Open Jumper Speed Class. Early in the class, Barrios set the time to beat with his first mount Ambosell at a clear 67.115, which would be good enough for fifth.

Barrios’ original time was eventually beat by Wilton Porter of Bartonville, TX riding Neolisto Van Het Mierenhof, who took home fourth place in 65.349 seconds. It was Mario Gamboa and Unico, owned by Stransky’s Mission Farms of Miami, FL who claimed the third place honors, dashing across the course in a clear 64.723 seconds.

Kessler almost had two blue ribbons when she and Mika galloped over the track in a speedy 63.574. They would have to settle for second though when Barrios took the lead with his second mount Colgate. Leaving out a stride to the last combination, Barrios and Colgate crossed the finish line in a blazing 62.894 seconds to net the victory.

“Colgate is a horse that I have been riding for a year, this was our first show last year,” stated Barrios. “She is starting to get the mileage. She is 10 years old, and she was a little bit green when I got her, but now she is starting to show a little more experience: go a little faster and be a little more competitive. She did great a WEF, and now I think she is ready to start winning these classes. She has a huge stride and I went very fast to the combination. I took the risk and it worked out well.”

Now Barrios will aim Colgate and his second mount Zara Leandra towards tomorrow night’s $25,000 Hagyard Lexington Classic, as well as the $75,000 Commonwealth Grand Prix. “I always like it in Kentucky,” he commented. “It’s nice, the horses love it, and last year I spent the whole summer here. This year I am planning to go to Calgary and it’s good to stop here and continue to Calgary, and then stop on the way back. I love it.”

The jumper action will continue in the Rolex Stadium tomorrow evening at 6:30 p.m. with the $25,000 Hagyard Lexington Classic, kicking off the seven part Hagyard Challenge Series featuring the $50,000 Leading Rider Bonus. Riders will also have the opportunity to showcase their mounts during Saturday’s $20,000 Bluegrass Classic and the $75,000 Commonwealth Grand Prix on Sunday afternoon.