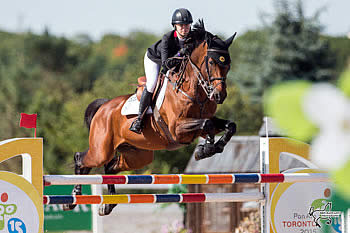 In addition to winning Sunday’s grand finale, Walker also claimed her first Caledon Cup, presented by RAM Equestrian.  Held over three phases of competition on Thursday, Friday and Sunday, the Caledon Cup is presented to the rider who gains the most points in all three phases.  With a third place finish in Thursday’s $10,000 Caledon Cup – Phase One as well as fourth in Friday evening’s $36,000 Caledon Cup – Phase Two, Walker was the clear winner of the 2016 Caledon Cup riding Deko de Landetta Z, her 12-year-old Westphalian stallion (Diamant de Semilly x Caletto I).

A total of 33 riders attempted the track set for Sunday’s $86,000 Caledon Cup – Phase Three.  Walker had the enviable position of being last to go, turning in the ninth clear round over the track set by two-time Olympic course designer Leopoldo Palacios of Venezuela and setting the stage for a thrilling jump-off.  In an unusual twist, the lead was jointly held by Keean White of Rockwood, ON riding Corette and Friday night’s winner, Ali Ramsay of Victoria, BC with Hermelien vd Hooghoeve, who had both crossed the finish line in the exact same time of 42.36 seconds when Walker entered the ring as the final jump-off challenger.

Walker ensured that there would not be a tie for the win, leaving all the rails in place and galloping Deko de Landetta Z through the timers in 41.91 seconds to claim victory.  In addition to her share of the prize money, Walker also received a $1,000 bonus from class sponsor HEP for wearing its branded saddle pad in all three phases of competition.

“I knew what I had to do!” said Walker of being the final jump-off challenger.  “I think the jump-off suited my horse really well.  He’s fast in the turns and he’s fast on the straightaways, so it was a good jump-off course for him.  I didn’t want to give a pull on the reins; I know he is fast, I knew I could trust him, and he was super for me.”

The win marked Walker’s second career victory in International Equestrian Federation (FEI) sanctioned competition, with the other victory coming earlier this summer in the €25,000 CSI2* Prix Hotel Byblos in St. Tropez, FRA.  Her partner for that win was also Deko de Landetta Z, her partner for the past four years.

“A win on home soil is always very special,” said Walker, who lives 45 minutes away from the Caledon Equestrian Park, host of equestrian events for the 2015 Pan American Games.  “It’s very special to compete at this venue because it has the prestige of the Pan American Games.  We can compete at it all summer long with great footing and great jumps.  We are very lucky to have this venue so close to home.”

Walker’s consistency throughout the week allowed her to claim the Caledon Cup, presented by RAM Equestrian.  At 22, she is by far the youngest athlete to ever hoist the trophy.

“It feels pretty good to win the Caledon Cup, and shows that my horse was feeling good all week,” said Walker of her last outdoor competition of the season.  “The time allowed in the classes all week was quite tight with Leopoldo designing, but my horse is naturally very fast.  On his day off on Saturday, we went for a hack and kept him happy.  It’s nice when you have a plan and you stick to it.

“Thank you to the sponsors,” continued Walker, who trains with Irish Olympic medalist Cian O’Connor.  “Without them, these classes wouldn’t exist.  Luckily, I had the HEP saddle pad on all week long and got the extra $1,000 there as well!”

Walker’s horses will now enjoy a break from competition while she begins her career in the family business at Stronach Group.  She then plans to compete in the Under 25 divisions at both the National Horse Show in Lexington, KY and the iconic Royal Horse Show in Toronto, ON in November.

Pan Am Challenge classes for junior and amateur show jumping athletes rounded out the competition at the CSI2* Canadian Show Jumping Tournament.  Fifteen-year-old Delany Owens of Burlington, ON riding Darrington beat out Mackenzie Munro of Toronto, ON aboard Fidelio 279 to win the $10,000 Low Pan Am Challenge, presented by Horseware Ireland.  Riders qualified for the Low Pan Am Challenge based on points earned throughout the Caledon Pan Am Equestrian Park show season in the .9m, 1m and 1.10m divisions.

Meanwhile, riders qualified for the $20,000 High Pan Am Challenge, presented by MVS Solutions, based on money won in the 1.20m, 1.30m and 1.40m divisions.  Julia Prather, 17, of Calgary, AB, topped the class riding Winny Boy for owner Bradon Equestrian Ltd. while Lindsay Farrow of Fenwick, ON was the runner-up riding Carbon Copy.