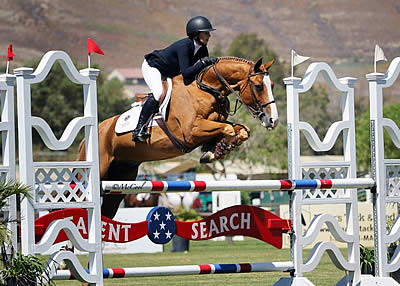 San Juan Capistrano, Calif. – Always a test of mindfulness and skill, the four phases of the 2016 Platinum Performance/USEF Show Jumping Talent Search Finals – West illustrate the demands on a show jumper. Nineteen qualified riders began the finals on Friday, which after three phases were narrowed down to a final four who then demonstrated their abilities to ride a course on four different horses. Sitting on top going into the final phase, Peyton Warren (Rancho Murieta, Calif.) emerged as the 2016 champion. Riding Casmir Z, Warren’s style and experience gave her the edge to secure the win.

“It means the world to me to win a Final like this because I’m passionate about the jumpers, and that’s what I ultimately want to do for a career,” Warren stated. “I have a lot of respect for this Final because I knew the goal was to have my horse prepared to jump the final round to the best of his ability. And I could feel him accomplishing that.”

The challenges commenced on Friday morning with Phase I, when riders entered the ring in small groups showing their skill with the required flat questions asked by judges Cynthia Hankins and Schuyler Riley. Riders worked their horses at all gaits, showing collection and extension, and movements such as haunches-in, shoulder-out, half-pass, and counter canter on a circle. Warren led that phase with a score of 97, with Megan Hilton (Seattle, Wash.) and Michael Williamson (Loomis, Calif.) a very close second and third, with scores of 96.5 and 96, respectively.

With a new format this year, Riley, in the role of Finals judge, developed the Phase II course, which included three of eleven gymnastic exercises developed by Beezie Madden and Anthony D’Ambrosio, as well as some of her own exercises. D’Ambrosio was present as Technical Delegate, and helped set the courses to the correct specifications.

Riders were given an option from fences 1 to 3 that were set equidistantly in a ‘U-shape’ off the left-lead. They could ride four strides between 1 and 2, and six strides between 2 and 3, or the reverse, six strides initially and then four strides from 2-3. Notably all of the top four chose to ride the four to six option. Other questions on course included a vertical-vertical combination in a line with an oxer-oxer combination, jumped in both directions. Going away from home, judges asked for an opening five strides and coming towards home to collect the horse for six strides. Hilton topped this phase with a 91; and with a 90 for Warren, she was still quite close to the lead. This phase had a 1.5 multiplier, which meant the two riders at the top were just one point apart, with 233 and 232. And with no other scores in the nineties, next best was Serena Anand (Coto de Caza, Calif.) with 214.5, followed by Williamson with 213.

Phase III asked a number of questions of the riders over a 16-effort track, designed by Cynthia Hankins, with D’Ambrosio building the course. Featuring a multiplier of two, this phase often changes the standings. Returning first, and sitting 19th at the time, Samantha Gastelum (Trabuco Canyon, Calif.) executed an impressive round, scoring 89, which ultimately moved her up to 10th place overall. Halie Robinson (Santa Barbara, Calif.) also rode well, earning an 85, which moved her from 13th to fifth overall.

Once again, Warren commanded the track, riding Casmir Z beautifully for a 92 score, the only ninety score of the round. Anand, Williamson, and Hilton scored 84, 80, and 79, to finalize the top four going into the Final Phase.

The nine effort Phase IV for the final four tested the riders’ abilities to not only catch ride three different horses but to try to bring out the best in each mount. Warren, who has a plethora of catch riding miles, executed solid tracks on each mount, and once again earned impressive scores in the nineties. Peyton’s final score of 374 was unbeatable. Second to Warren was Anand, with an overall total of 340, followed by Hilton at 326 and Williamson in fourth with 319.

Not new to this challenge, Warren had competed at these Finals before. “This was my third year doing the Finals. Last year, I finished in the top 10 with a horse I had done Young Riders on the same year.”

All of the top four competitors agreed that the format of the final evolved from one phase to the next, and tested horsemanship as well as technique. The mission of the Final to “test a rider’s ability to ride a jumper-style course effectively while maintaining the classic American forward style of riding… and build on preparing the next generation of international jumping riders” was truly in alignment.

Warren was focused and not fearful of this multi-phase test of her skills. “Shockingly, I wasn’t nervous going into this particular Final. I was lucky enough to have my horse a month or so before the Final so I could work with him at home on the flat and create a strong bond, so when I got to the show there was no further work I needed to accomplish,” the champion explained. “I was very confident in my ability and my horse’s rideability. This was most important to me because I usually have to get used to a horse the week I show it, since I do mostly catch riding. I saw the Final as challenging, but the tracks were so much fun to ride on my horse.”

Warren was awarded the Denali Memorial Perpetual Trophy, donated by Maya Hamburger. She also received an iPad from Platinum Performance, engraved with the Platinum Performance/USEF Show Jumping Talent Search Finals logo. Jill Humphrey of JH SportHorses, who trains Warren, took home the Leading Trainer Award, donated by the late Mr. Hugh J. B. Cassidy, III. The Gulliver Trophy, donated by Karen Healey, was awarded to Megan Hilton’s Cantoblanco, whom the judges chose as the best horse of the competition.

The Talent Search Program plays an important role in the rider pipeline as it addresses the principal that form follows function and that it is important for a rider to have equitation basics and a solid jumper seat position in order to become an effective jumper rider. The Talent Search classes test a rider’s ability to ride a jumper style course effectively while maintaining the classic American forward style of riding. The Talent Search program fosters this tradition in U.S. Show Jumping and builds on preparing the next generation of international jumping riders. Learn more at usef.org/talentsearch.

From the USEF Communications Department
Courtesy of Blenheim EquiSports