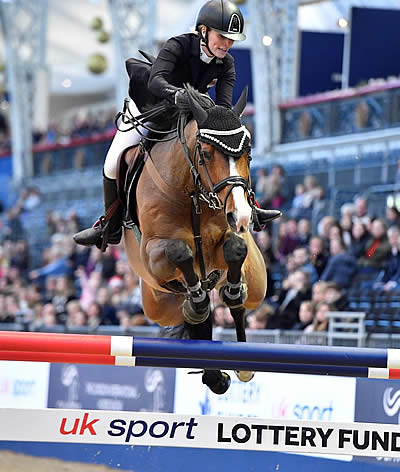 Taking place from 17-23 December 2018, Olympia, The London International Horse Show is set to welcome the next generation of British Show Jumping talent, who will compete in front of the 90,000 visitors expected to attend. These leading junior equestrians will feature in three classes: a 128cm class, The Voltaire Design 148cm class, and The Voltaire Design Under-25 British Championship, the last of which will be held on the morning of Friday 21 December. 24 riders have been invited to take part in the Under-25 class, who will battle it out for the Championship Title in Olympia’s impressive Grand Hall.

Although still young, the Under-25 riders have already achieved a remarkable amount in their relatively short Show Jumping careers. And none more so than Jessica Mendoza, who, in 2016, at the age of 20, became the youngest competitor in 40 years to join the Team GBR Show Jumping squad, in which she was travelling reserve for the Rio 2016 Olympic Games.

Some of these youthful equestrians benefit from receiving an incredibly high level of training. 17-year-old Robert Murphy worked in close quarters with the legendary British Show Jumper Nick Skelton at Olympian Laura Kraut’s stables in Florida, USA. Skelton became the British equestrian story of the Rio Games when he won individual gold at the ripe old age of 58. This followed his Olympic team gold four years before in London. It appears some of his success is rubbing off on Murphy who, in 2014, claimed a gold medal at the Children, Junior and Young Rider European Championships as a 13-year-old.

Fans of the sport will certainly recognise some of the surnames competing this year, including Jack Whitaker and Oliver Fletcher, who will both be attempting to emulate their parents’ many successes. Fletcher is the son of former Show Jumping Olympian, Graham Fletcher, whose wife was also a London 2012 reserve rider. In an unlikely turn of events, Whitaker – on his 17th birthday – imitated his father Michael’s phenomenal 1984 Los Angeles Olympics silver medal by claiming a Youth Olympics team silver medal in Buenos Aires, Argentina.

The 128cm class has the makings of being a tightly fought contest and will see the three top-placed riders from the 128cm class at British Show Jumping National Championships 2018 go head-to-head once again. The eventual National 128cm champion, Tabitha Kyle, will compete at Olympia alongside Noora Von Bulow and Poppy Deakin, who finished in second and third place, respectively.

Meanwhile, in The Voltaire Design 148cm class, Hannah Barker is representing the third generation of successful riders in her family. Her uncle, Paul Barker, won three international and two national grand prix classes, while her grandfather, David Barker, was a member of Great Britain’s Nations Cup Team in the 1960s and represented his country at the Tokyo Olympic Games in 1964.

The 148cm class will also feature several members of the team that won gold at the European Pony Championship earlier this year, who will now be competing against each other. Perdita Digby, Nicole Lockhead Anderson, Shaunie Greig, and Claudia Moore will all have to put friendships to one side, as they contest for the title in what will undoubtedly be a competitive yet good-natured affair.