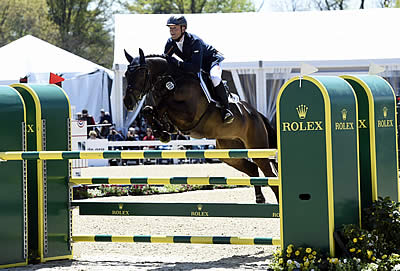 Jung had the advantage of going into the stadium early with 13 to go on Fischerrocana FST instead of third as he was lying in both second and third place overnight going into the final day. Excitement was in the air for the 23,500-plus spectators that filled the Rolex Stadium under the brilliant sunshine and clear blue skies.

Price was last into the arena and the whole stadium fell completely silent. If Price was to claim his first Rolex Kentucky Three-Day victory he would have to go clear and also within the time. Despite skillfully guiding his horse Wesko around the first nine fences, and with just four obstacles to go, he just brushed a pole on fence 10 and that handed the title to Jung.

Speaking of his victory, Michael Jung said, “You always have pressure on yourself going into the competition. You always do the best dressage you can, a clear round in the cross-country and show jumping. This is what we train for at home and prepare everything – but you are always thinking what you can do better so that is always the reason why you have pressure on yourself. Of course after my clear round on Fischerrocana FST I was a little bit more relaxed, but also I stayed focused and was concentrating on my second horse. But then I was a little bit too fast into the combination and this was the reason because of my first horse who she needs more gallop and a little bit more speed – I then did a little bit the same with Sam and this was my mistake.”

Course designer Richard Jeffery from the UK set a formidable course over 13 fences with a total time allowed of 91 seconds, meaning riders had to maintain a healthy speed of 375 metres per minute. All the jumps were previously used at the 2010 Kentucky World Equestrian Games and were staged to thrill the crowd and global TV audiences. The final day of the competition saw 41 starters with riders representing six nations, with just eight double clears and also featured five riders riding two horses in the final show jumping phase.

Jung could have also won on his other horse, La Biosthetique – Sam FBW, the horse who he also guided to become world champion in the same venue back in 2010. Uncharacteristically, ‘Sam’ had two poles down and this moved him down from second to third position. Last year’s Rolex Kentucky Three-Day Event winner, William Fox-Pitt, a true veteran of the sport, knew he could not catch Jung, but that did not affect his ride. To the thrill of the crowd who were willing him over each fence, Fox-Pitt delivered another impeccable clear round with an almost standing ovation from the delighted fans.