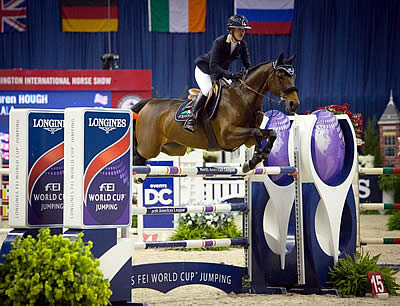 Washington, D.C., (USA), 30 October 2016 – A mix of veteran riders and up-and-coming talent advanced to the final round in the third leg of the Longines FEI World Cup™ Jumping 2016/2017 North American League Eastern Sub-League. With the advantage of riding at the end of the order, Lauren Hough (USA) delivered the fastest, double clear performance aboard 12-year-old mare Ohlala to claim the victory.

In the heart of the country’s capital city, at the Verizon Center, the area’s main sports and entertainment arena, a starting field of 28 competed over a track designed by Alan Wade (IRL). A technical course in the small, indoor space prompted competitors to note throughout the night that the jumps came up quickly and multiple questions were asked over the 12 obstacles, which included three double combinations.

Notable surprises in the first round included refusals from top, proven pairs: McLain Ward (USA) and HH Carlos Z and Todd Minikus (USA) and Quality Girl. Both riders retired and did not complete the class.

Seven horse-and-rider pairs went on to record clear first rounds. The initial competitor to ride clear, 22-year-old Catherine Tyree (USA), is part of a rising talent pool of North American riders. But the class would eventually go to the seasoned professionals, with all top four riders having Olympic experience and ranked within the top 50 in the Longines World Rankings.

In the final round, that featured four, consecutive rollback turns, bookended by long, galloping lines, Laura Kraut (USA), aboard Confu, set the score to beat midway through the order with a fast, clear performance. The next two riders, Beezie Madden (USA) on Quister and Kent Farrington (USA) on Creedance, both recorded faster times, albeit with a rail each. Last to ride, Hough showcased her four-year partnership with Ohlala to add strides to two lines – but combined with tighter turns, she managed to steal the victory from Kraut.

“I had the advantage of going last and seeing what Kent’s time was and Laura’s time was, and I decided to play it on the safe side and put in extra strides,” Hough said. “But my horse is naturally fast and she can cut turns short. She’s been in great form all week. I did take a bit of a risk with the turns because Laura’s not a slow rider. I had to ride a smart round.”

The class was Ohlala’s first indoor competition of the season, although Hough herself had competed in one prior indoor competition in advance of the Washington International Horse Show. The veteran mare will next show at the Royal Agricultural Winter Fair in an effort to accrue more points toward qualifying for the Longines FEI World Cup™ Jumping Final.

“She’s always been a great horse – a competitor and a winner,” Hough added. “As you grow with the horse, you change some things here and there, and I changed her bridle in the last year and have really concentrated on her rideability on the flat. The jumping comes natural to her – so I’m just tweaking little things here and there. She’s very adaptable to all types of venue. I would say, in the last couple years, her rideability indoors has improved quite a bit.”

Following this event, Kent Farrington currently holds the top position in the Eastern Sub-League standings, tied with Audrey Coulter (USA) in total number of points, heading into the next event at the National Horse Show in Lexington, Kentucky on November 5.