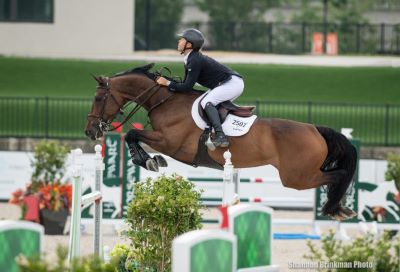 After 59 entries challenged the first round of the competition, seven pairs were invited to test the jump-off track. Farrington and his own 2012 Dutch Warmblood mare (For Fashion x Canturo) have been partnered for less than a year, and have been starting small, he reported: “We started very small, and she’d only shown up to 1.35m. She’s come on strong in the last eight or nine months, and she has a lot of potential,” he said. “She’s unbelievably careful, so we’ll have to determine how big she wants to jump, but whatever level she does I think she’s going to be very competitive.”

With several smooth rounds produced in the jump-off contest, Farrington chose to ride the course in a way that would help her grow as an athlete, he shared about his jump-off strategy. “She has a very big stride, and I’ve been working on her turns and her rollbacks. I thought she did that very well today. It’s been a struggle for her in the past to rollback right, [quickly] to a vertical, which was jumps two to three in this jump-off. She’s coming on strong, so I’m very happy with her progress.”

Ballard and the 2011 Selle Francais mare (New Boy de Logerie x Cumano) owned by Ilan Ferder were one of 36 entries to challenge the power component of the course, with 22 pairs continuing on to the speed phase. Ballard, who now has six wins under her belt and one podium finish in her last seven outings at TIEC, was able to watch most of the class and noticed that the course offered minimal opportunities to trim the number of strides between fences, but that by taking a longer route in one turn, she could set herself up to be tighter to the liverpool.

“Today was a really interesting class,” she recapped. “I actually got to sit and watch a lot. There wasn’t a huge opportunity to do more or fewer strides than everybody else. It stayed very close. The first jump in the speed portion was the green vertical at the end of the combination and everybody was going inside [to the liverpool] afterwards. I really felt that the inside turn put you on the outside [track] to get back to the liverpool.

“They were doing seven or eight [strides] and I said to Ilan [Ferder], ‘I really believe I can still do eight to the end jump, but get there in a better way, and I can be much faster to the liverpool.’ So I did seven to the Liverpool.” Ballard revealed that her later position in the order of go was helpful in securing the win, as well. “I was lucky enough that I went late, so nobody really picked up on that. Today I think it was a class that the strides really played a big role, because it was so close. To be able to leave out a stride like that to that particular jump, I think gave me an edge.”

Matt Williams (AUS) competed in the irons with FR Yandoo Pennsylvania, his own 2012 Australian-bred mare owned in partnership with Brigio Williams, winning the $2,000 Power & Speed Stake CSI 3* with a speed phase time of 29.744 seconds. In reserve, Daniel Pedraza (MEX) and Santa Rosa Yalta, the 2012 Mexican Sport Horse mare owned by Proyectos Agricolas sa de CV, stopped the timers in 30.648 seconds, while Rachel Lindsey (USA) claimed third on a speed phase time of 32.28 with Comander 16, her own 2011 Oldenburg gelding (Coup de Coeur x Lupicor). Thirty entries navigated the power phase of the track set by Anthony D’Ambrosio (USA) with 17 horse-and-rider pairs continuing on to the speed phase of the course.