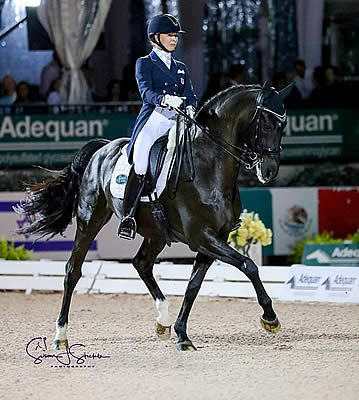 Wellington, FL – March 29, 2019 – In the final “Friday Night Stars” of the 2019 Adequan® Global Dressage Festival (AGDF), Katherine Bateson Chandler (USA) and Alcazar captured the win in the FEI Grand Prix Freestyle CDI4* presented by Douglas Elliman Real Estate on Friday, March 29. It was a night full of freestyle competition with two classes held under the lights with a full crowd of spectators.

With the final Grand Prix Freestyle win of the season, Bateson Chandler and Alcazar, Jane Forbes Clark’s 14-year-old KWPN gelding by Cantango, have shown growth and potential through the circuit.

Their win garnered a final score of 75.850% from the judges, a personal best for the pair.

Earlier in the evening, the winner of the FEI Grand Prix Freestyle CDI3* presented by Brooke USA was Ashley Holzer riding Havanna 145, owned by Diane Fellows. Holzer and Havanna performed a high degree of difficulty test to music based around the pop hit “Havana” by Camila Cabello, with music and choreography by Tom Hunt. The judges rewarded them with a final score of 76.995%.

“[In] the end she started to really settle with the Havana music and she came to that last piaffe and really sat down and started to swing in her back,” Holzer recalled. “I’m very happy that she was able to settle at the end. She started to feel really good so that was exciting. The passage half-pass felt nice for me.”