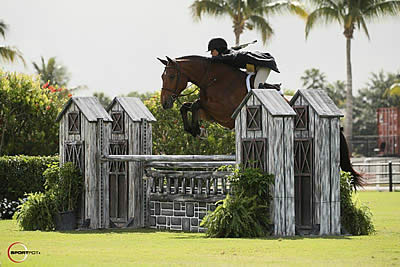 Wellington, FL – March 28, 2019 – Liza Boyd of Camden, SC and Tradition were victorious in the final week of the 2019 Winter Equestrian Festival (WEF) as the pair captured the $15,000 USHJA International Hunter Derby Hunt & Go on Friday, March 29, at Equestrian Village at Palm Beach International Equestrian Center. The “Hunt & Go” derby is one of three major events for hunter riders during Week 12.

Thirty-five horse-and-rider combinations contested Ken Krome’s course, which was designed in the newer Hunt & Go format, on the grass. The Hunt & Go format was only introduced several years ago as a way to shorten the original derby format while still offering a classic and a handy round. Instead of all riders competing through the classic and then returning at a later time for a handy, the course is designed as half classic and half handy. Riders are therefore able to highlight their horses’ strengths in both formats.

Krome’s course consisted of four high option fences, a trot fence, and a ‘bounce’ line in the ‘handy’ portion of the course. Judges panels included Otis Brown and Ann Braswell in panel one, and Robert Crandall and Rob Bielefeld in panel two.

Out of the 50 entries that contested Guilherme Jorge’s speed course in the $36,000 Bainbridge 1.45m Classic CSI 5*, 15 were able to go clear and put the pedal to the medal to find the quickest round. Of those 15, the fastest was Francisco José Mesquita Musa (BRA), who rode Catch Me Imperio Egipcio for owner Daniel Aguiar Morelli to the win. They posted a time of 62.20 seconds, more than two seconds faster than the next competitor.

The start list of 72 entries was full of top horses and riders, which showed when 19 advanced to the jump-off of the $36,000 Puissance America 1.45m Classic CSI 2*. Eighteen chose to return to contest the jump-off.

The early leader was Fabio Leivas da Costa (BRA) on Bonne Chance Farm’s Randon Pleasure. They set the first time to beat as the pathfinders in the ring in 39.12 seconds.

Costa’s time held until Lacey Gilbertson (USA) and Seabrook LLC’s Baloppi entered the ring. They lowered the time to 38.65 seconds, which would hold up for second place.

One of the fastest pairs on the circuit, Laura Chapot (USA) and Chandon Blue, were the ones who were able to post the winning time of 37.03 seconds. They were able to take advantage of Chandon Blue’s large stride to leave out strides in two lines and take their fourth win of the circuit.