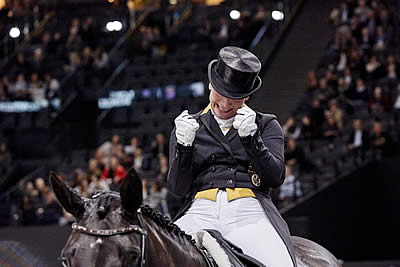 German superstar, Isabell Werth, returns to defend her title at the FEI Dressage World Cup™ 2019 Final in Gothenburg (SWE) next week. She’ll have to fend off many powerful opponents, including America’s Laura Graves. (FEI/Liz Gregg)

Demand for tickets for the FEI Dressage World Cup™ and Longines FEI Jumping World Cup™ Finals has been so incredibly high that the show organisers are providing a big-screen experience for those who can’t access a seat in the Scandinavium Arena in Gothenburg (SWE) on the deciding days. “The tickets have long been sold out and we have been working for a long time to come up with a solution that makes it possible for more people to take part in this year’s horse party!” said Gothenburg Horse Show Project Manager, Patrik Fredriksson. So, in co-operation with EuroHorse, all visitors can watch Saturday and Sunday’s thrilling Final action live on-screen in the adjoining Swedish Exhibition & Congress Centre which hosts a hugely popular equestrian fair.

The excitement is already palpable with just days to go before the doors are opened to many of the best horse-and-rider combinations in the world next Wednesday, 3 April. For Germany’s Isabell Werth, it’s a matter of taking on all challengers in her bid to add a fifth Dressage title to the extraordinary list of achievements that has confirmed her status as the most successful equestrian athlete of all time.

Stalking her every inch of the way will be America’s Laura Graves who, partnering the now 17-year-old Verdades, has come dangerously close to ousting the German star over the last few seasons. They were runners-up at the Finals in 2017 and 2018, and, at the FEI World Equestrian Games™ in Tryon, USA last September where they helped clinch team silver, only Werth and Bella Rose stood between them and individual gold.

Graves has to be hungry to go that one step further which would see her become only the third American FEI Dressage World Cup™ title-holder in the 34 editions of the series.

It was in Gothenburg in 2003 that Debbie McDonald claimed the USA’s first victory partnering Brentina, and Steffen Peters steered Ravel into pole position in Las Vegas six years later.

Look at the line-up though and there are many other hopes and dreams to be realised. Could Patrik Kittel and Delauney OLD become only the second-ever Swedish champions? It’s 21 years since Louise Nathorst and LRF Walk on Top triumphed on home soil in Gothenburg, pipping the legendary duo of The Netherlands Anky Van Grunsven and Bonfire, while Isabell Werth and Anthony FRH finished third.

Can Denmark’s Daniel Bachmann Andersen produce the same level of expertise that saw him win the final leg of the Western European League at ’s-Hertogenbosch (NED) two weeks ago with the one-eyed stallion Blue Hors Zack? What an amazing story that would be: only one other Dane has ever done it and that was Anne-Grethe Jensen with Marzog who pinned Great Britain’s Christopher Bartle, now one of the world’s most celebrated coaches, into second place with Wily Trout, while Switzerland’s Christine Stuckelberger finished third with Rubelit von Unkelruf. That was at the inaugural FEI Dressage World Cup™ Final staged in ’s-Hertogenbosch in 1986 – all of 33 years ago but, like all great sporting moments, embedded into the memory of those who witnessed it.

And then of course there’s Ireland’s Judy Reynolds and Vancouver K, a horse purchased for the price of a second-hand car who has broken Irish records like it’s going out of style in recent years and who, at 17 years of age, is better and fresher than ever. This pair has a big fanbase – Reynolds has achieved every little girl’s dream in finding a horse to take her to the top of the sport, and the diminutive and super-talented rider has been consistently threatening for a podium placing at majors over the last few seasons. Gothenburg holds good memories for them because they finished eighth at their first FEI Dressage World Cup™ Final there in 2016 before moving right up to fourth in Omaha (USA) the following year. They’ve been achieving personal-best scores in quick succession over the last few months and their “Riverdance” themed floorplan and music will get the toes tapping and the hands clapping for sure – the Gothenburg crowd are guaranteed to fall in love with them. Could they completely break the mould and become the very first Irish winners? What a story that would be.

Gothenburg is Sweden’s second largest city, located on the west coast of the country with a stunning archipelago just around the corner. It’s a great city to visit and it’s already starting to fill up with fans wanting to get a glimpse of their favourite equestrian stars and waiting for the action to kick off with warm-up classes and national events on 3 April. The first competition in the FEI Dressage World Cup™ Final, the Grand Prix, will take place at 13.00 on Thursday 4 April and the deciding Freestyle will hold centre stage on Saturday 6 at 16.00. It’s going to be a week of spectacular sport, and for Dressage fans the biggest question is: can anyone beat Isabell? We’ll have to wait and see.

Check out all the details here.