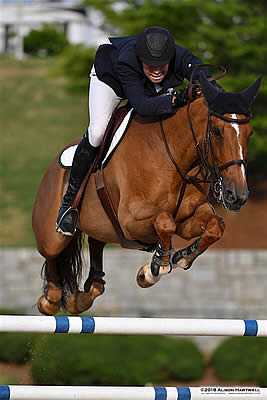 Chase Boggio Victorious in the Jumpers

Week I of the Atlanta Summer Classic drew to a close the same way it kicked off: with Chasen Boggio in the winner’s circle. This time, he topped the field in Saturday’s $25,000 Outback Steakhouse Grand Prix aboard Victoria Press’ Quesada D’Elle.

This win comes on the heels of the pair’s victory in Wednesday’s $7,500 Welcome Classic.

“Winning the Wednesday class definitely gives you that boost of confidence heading into the weekend,” Boggio said.

Boggio, of Canton, Georgia, outgunned the other contenders to claim top prize in the grand prix, held in the Olympic Ring at the Georgia International Horse Park in Conyers, Georgia. Only two contenders returned to the arena to battle it out over the jump-off course.

“The track was more technical than I initially thought when I walked the course,” he commented, adding that he’s very familiar with that arena. “I thought we may see a few more clears in the first round. But the course rode like one related distance, so if something happened, it was hard to get yourself re-organized and back on track.”

First up to tackle the shortened course was Boggio, aboard the Selle-Francais mare. Weaving their way around the track, the duo set the winner’s pace at clear and quick 31.682 seconds.

“Quesada is very fast, very careful, with a huge stride and I knew I could ride her aggressively,” he remarked. “But I knew Michael (Kirby) would ride aggressively too. I tried to be quick and clear, taking the direct lines. In the last line, I left a stride out, doing nine instead of 10, and I think that may have been the difference.”

“I don’t ride full time, so we’re very selective about where we go to show,” he said. “We plan the majority of our year around Bob (Bell)’s shows.”

Michael Kirby, of Williston, Florida, returned to the ring in an attempt to catch the pace to beat. In the irons of Fairly Stable LLC’s Play Boy, Kirby navigated his way to a clean jump-off round in a time of 32.179 seconds — less than a second behind the winners. The duo ended the competition in second place.

Boggio ranked third for his clear first round with his own Co-Pilot. The pair did not attempt the jump-off round.

Heather Hooker, of Wellington, Florida, placed fourth for her ride in the saddle of Meredith Darst LLC’s Quester de Virton. The pair finished well within the time allowed of 83 seconds, but a rail tumbling early in the first round cost them four faults. Ranking fifth was Williston, Florida’s Tricia O’Connor, who garnered a four-fault performance with Michael Kirby’s KT Bolo. And Kirby found himself back in the ribbons, claiming sixth for his four-fault ride with his own Disaronno.

Seventh place was awarded to Merideth Bryans, of Newborn, Georgia, who was riding her own Guidam Sid, while Ocala, Florida’s Dana Noga ranked eighth aboard her own OBOS Pepperpot. Nicki Mathen, of Austin, Texas, rode to ninth position aboard CopperHillSportHorseSales.com’s Felix BC. Rounding out the Top-10 placings was O’Connor, back in the ring aboard her own Coolman 78.

Chasen Boggio wasted no time making his way to the winner’s circle Week I of the Atlanta Summer Classic. Aboard Quesada D’Elle, owned by Victoria Press, Boggio topped the contenders in Wednesday’s $7,500 Welcome Classic.

Eleven horse and rider contenders tackled the first round of the opening jumper class, which was set in the Olympic Ring at the Georgia International Horse Park in Conyers, Georgia. Boggio, who went later in the order of go, made short work of the track, finishing within the time allowed of 78 seconds. He was one of eight competitors to return to the ring for the jump-off round.

Boggio and Quesada D’Elle set the pace to beat, finishing the class with a double clear performance, a jump-off time of 36.431 seconds and the lion’s share of the prize money.

“Quesada is a relatively new ride for me and it’s been wonderful to have her,” Boggio said. “She’s completely different from my other horse, Co-Pilot, so it’s been a great lesson in adaptability.”

“I’ve been riding her since November and have been trying a few different things with her,” he added. “We were having a lot of four-fault, eight-fault rounds, but I knew we were close to breaking through. We just seemed to click this week — I’m really proud of our wins.”

Third place was awarded to Williston, Florida’s Michael Kirby. First to tackle the jump-off round, Kirby racked up two clear round in the irons of Fairly Stable LLC’s Play Boy, galloping to the finish in 37.785 seconds. Boggio returned to the ring to pick up the fourth place prize for his double clear performance with his own Co-Pilot. The pair finished in 40.198 seconds.

Tricia O’Connor, of Williston, Florida, posted the fastest of the four-fault jump off rounds. With Michael Kirby’s KT Bolo, O’Connor rode to the timers in 39.072 seconds, placing fifth. Ranking sixth was Austin, Texas’ Nicki Mathen, who guided CopperhillSportHorseSales.com’s Felix BC to a four-fault jump-off round in 39.957 seconds.

Seventh place was awarded to O’Connor, this time riding her own Coolman 78. The pair reached the timers in 42.681 seconds, sending two rails tumbling on course for a total of eight faults. Rounding out the Top-8 was Newborn, Georgia’s Merideth Bryans, who achieved an eight-fault jump-off round in a time of 46.320 seconds with her own Guidam Sid.

Sevani and Caroline Monaghan Winners in $5,000 Dash for Cash

Twelve contenders showed up the Olympic Ring at the Georgia International Horse Park in Conyers, Georgia to gallop their way to the top prize in this special no entry fee competition.

Monaghan, of Birmingham, Alabama, was aboard her own Sevani. The duo raced across the single round, consisting of 15 numbered obstacles. In the end, they left all the jumps standing squarely in their cups, reaching the timers in a blistering 76.439 seconds — six seconds faster than the runner up.

Ranking second was Jordan Carlson, of Alpharetta, Georgia. In the irons of Kelly Sims’ Charisma, Carlson galloped his way to the timers, posting a clear ride in the relatively pokey time of 82.636 seconds.

Third place was awarded to Atlanta, Georgia’s Pierce Jenkins, who was riding his own S-Acorada Donaldson. A rail fell mid-way through the course, landing the pair a time of 86.834 seconds. Ranking fourth was Olivia Epple, of Woodstock, Georgia, who ended the class with a time of 88.491 second aboard Livhaven Stables’ Hot Spot. Fifth place was earned by Baton Rouge, Louisiana’s Julia Titus, who was riding her own Broxhill. The duo galloped to the finish in 92.873 seconds.

Cara Magliocco, of Austin, Texas, placed sixth for her 93.030 second round with her own Chuckomo, while seventh place was awarded to Warrenville, South Carolina’s Dorian Eubanks, who finished in 93.514 seconds aboard Ashley Pace’s High Offley Estella IV.

Rounding out the Top 8 placings was Celia Cram, of Aiken, South Carolina, in the irons of her own Auspicious. The duo reached the timers in 99.820 seconds.