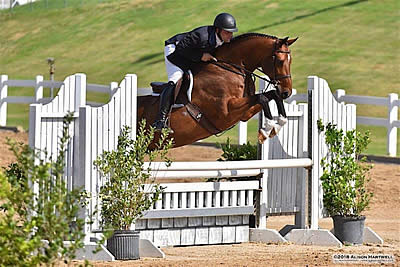 Michael Leon proved he was king of the hunter ring during Week I of the Atlanta Summer Classics, as he laid claim to the top 3 placings in the Classic Hunter Derby. Aboard Kelly Sims’ Eleventh Hour, the pair topped the field of 20 entries to secure the title.

Leon, of Marietta, Georgia, and Eleventh Hour earned themselves a classic round score of 88, followed by a handy round total of 90. The duo ended the competition with a overall score of 178 points — five points above the runner up.

“Eleventh Hour is a sweet horse who jumps his heart out every time I ride him,” Leon said. “To get scores of 88 and 90 — it’s exciting. You put in all the hard work at home, then to come here and have that work recognized by the judges, it’s so rewarding.”

Leon has been partnered with the eight-year-old horse since October 2017. While Leon said there isn’t much that fazes the horse, the handy round did pose some questions.

“There was a gate you had to open in the handy, which we had never done before,” Leon explained. “I thought it may be a challenge: How do we approach it? Will he (Eleventh Hour) be okay as I lean over to open it? But it didn’t bother him at all.”

Leon ranked second for his two rounds aboard Kelly Sims’ True Enough. Their first round score of 86 points, combined with a handy score of 87, earned them a grand total of 173 points.

Leon returned to the ring once again, this time to claim third prize in the irons of Kelly Sims’ Transparency. Together they earned a classic round score of 87, along with a handy round total of 85 points. The duo ended the competition with an overall score of 172 points.

“It helps to have an owner like Kelly Sims, who offers so much support to me and to the sport,” he added. “When you have that support and those great horses, it makes my job easy.”

The Atlanta Summer Classic marks an anniversary for Leon, who relocated from California to Georgia at this time last year.

“This was the first horse show I attended after I moved,” Leon said. “And the care that Bob Bell takes to run these shows is impressive. It makes for a great presentation to have him there to recognize the class and the competitors.

“And they are managing the footing here well — it’s 1,000 times better,” he exclaimed. “The way horses canter across the ground, taking off and landing softly, it’s made a great difference.”

Caroline Willard, of Oak Ridge, North Carolina, ranked fourth for her two rounds aboard Tara Dow-Rein’s Pilot. The pair rode to a classic score of 85 and a handy round of 86 points, finishing the class with an overall tally of 171 points. Fifth place was awarded to Zionsville, Indiana’s Erin Clayton, who was riding Kaitlyn Smith’s Payard. Clayton guided Payard to a first round of 86.5 points and a handy round of 82.5, for a total score of 169.5.

Ranking sixth was Devney Hoft, who was aboard Jacinda Purrington’s Coretto. Hoft, of Rolesville, North Carolina, accrued an overall tally of 167 points. Jennifer Tate, of Bourne, Massachusetts, placed seventh for her two rounds with Barbara Kravetz’ Carsten S. Tate rode to a grand total of 157.5 points.

Ranking ninth was Carolyn Bell, of Alpharetta, Georgia. Aboard Eleese Shillingford’s Odyssey, Bell rode to a total score of 154 points. Tate was back in the ribbons, picking up tenth place for her two rounds aboard Barbara Kravetz’ Caspari. The duo rode to a grand total of 151 points.

Isabella Randall, of Cartersville, Georgia, ended the class with an eleventh ranking for her two rounds aboard Michael Leon’s Celano. The duo achieved a total of 147.5 points.

Rounding out the top 12 was Josie Evans, of Covington, Georgia, who was in the irons of her own QVF Colt Seavers. The pair rode to a tally of 146 points. Additionally, Evans left the ring $300 richer after achieving the Classic Hunter Derby High Non-Pro Bonus.

The first week of equestrian sport has drawn to a close at the Atlanta Summer Classics, but not before Mia Bakotic put her handy hunter skills to the test in the $1,000 USHJA Zone 4 Child Adult Handy Hunter. Aboard her own No Question About It, Bakotic claimed top prize.

There were six entries in the class, which boasts no entrance fee for contenders. Bakotic made short work of the handy course, earning herself an overall score of 80 points.

Only one point off the winner was runner up Polly Johnson, of Alpharetta, Georgia. In the irons of her own Sweet William, Johnson weaved her way to a score of 79 and a second place finish. Ranking third was Madeline Jordan, of Tallahassee, Florida, who was riding her own Tribecca. The duo achieved a handy score of 77 points.

Fourth place was awarded to Camryn Halley of Oviedo, Florida, who was aboard Laura Barrett-Gurtis’ I’ll Say JSF. The duo achieved a tally of 68 points. Ranking fifth was Mt. Pleasant, South Carolina’s Susan Davidson who rode her own Calliope to a score of 66 points.

Bringing home the sixth place prize was Marietta, Georgia’s Sophie Feis, who was aboard Gina Gasko’s Cordino. The pair accrued a handy score of 55 points.

With no entry fee, the $1,000 USHJA Zone 4 Child Adult Handy Hunter is a great opportunity to get in the ring and gain valuable mileage putting those handy hunter skills to the test.