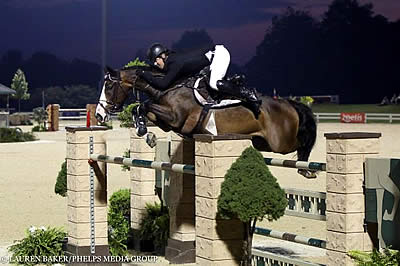 Lexington, KY – July 30, 2016 – The luck of the Irish certainly favored the winners of Saturday’s $50,000 Rood & Riddle Kentucky Grand Prix at the Kentucky Summer Horse Show. Irish riders Shane Sweetnam and Christina Kelly rode away with the top three ribbons, with first and third won by Sweetnam and Kelly earning second.

The first round saw 30 entries over fellow Irishman Alan Wade’s course, with 14 horse-and-rider combinations eventually advancing to the short course. The spectators cheered from the stands, enjoying the top-quality show jumping during the Kentucky Horse Park’s 14th annual Hats Off Day.

Kelly and Andrea O’Brien’s Kingdom were among the first to turn in a clear round, securing their place in the jump-off early on in the class.

“Kingdom has come such a long way,” Kelly said. “He jumped his first grand prix in April in Aiken, and he has moved up slowly. He has been unbelievable, and this is the biggest venue he has competed at, especially with the crowds and the night class. He showed so much potential, and he is getting better and better.”

Sweetnam and the Blue Buckle Group LLC’s Cobolt jumped their clear effort shortly after, and later Sweetnam followed up with another jump-off-qualifying round aboard Main Road, owned by Sweet Oak Farm and Seabrook LLC.

“Cobolt is a lot of fun to ride,” Sweetnam said. “It’s taken me a little while to figure out the buttons, but we seem to have figured it out in the last couple months. He’s been very consistent, so I’m very happy with him. He’s a really quick horse, and he jumped really well here the other night.”

As the riders returned for the jump off, only five of the 14 qualified would repeat their clear efforts. Kelly returned with Kingdom to lay down a quick round, saving time by taking tight turns and opening up the 17.3-hand horse’s massive stride between the combinations. Kelly and Kingdom stopped the timers in 45.474 seconds, securing her hold on the lead.

“I was very happy with him,” Kelly said. “I was going into this hopeful that he was going to jump well. My strategy was just to go double clear, but he was jumping so well I figured I could push him a bit to go faster. The track rode fantastic; I love Alan Wade’s courses.”

Sweetnam entered the ring on Cobolt shortly after, taking his turns even tighter and using his smaller horse’s agility to its full potential to shave an impressive two seconds off of Kelly’s leading time, finishing the course in a mere 43.882 seconds to take over the top spot.

“Christina was really fast,” Sweetnam said. “I know she was really quick everywhere, but Christina’s horse is a big-strided horse, and I think my fellow may just be a bit niftier and quicker through the corners. He’s definitely more competitive that way; he’s bouncy, you can turn quicker, and he gets his eye on the jumps. I think he was excellent in the jump-off. He likes going fast; he’s a bit like his dad [Cyklon 1083], so it’s great that Cobolt is winning, too.”

During his career with Cyklon 1083, Sweetnam has experienced a lot of success. At 10 years old, Cobolt is one of Cyklon’s oldest sons and is following in his father’s footsteps. Sweetnam got the ride on the gelding in January, and has since won the $130,000 Ariat Grand Prix CSI3* at Tryon, among other successes at the 1.50m level.

The final rider to return to the ring, it was clear that Sweetnam would be taking home the blue ribbon, but it was a question of whether he could beat his earlier time on his next mount, Main Road. Despite coming close with their clear effort, Sweetnam and Main Road’s time of 46.444 seconds would earn them the third-place ribbon.

“Main Road is only an 8-year-old,” Sweetnam explained. “He’s had a bit of success already this summer, and he’s coming along all the time. He was pretty quick tonight, and I think if I had to, I could have been quicker, but I would have taken more risks. I was already happy with his round, and he did exactly what I wanted to do. He can be very, very quick, and I think he’ll have other days where he’ll win, too.”

Sweetnam concluded, “I love Kentucky, and we always have success here. It’s our home for the summer, so that makes it nicer. I also want to thank my sponsors, between Lisa Lourie, the Buckle Up Group, the Gilbertsons and Paul Tracey; I’m just lucky to have such great owners. I’ve been very lucky this year to have these horses.”

Also going double clear, Adrienne Sternlicht and Starlight Farms 1 LLC’s Toulago tripped the timers in 49.442 seconds to take home fourth place. Trailing very closely behind, Juan Ortiz and the Synchronicity Group’s D’ulien Van De Smeets ended up in fifth place with their time of 49.842 seconds. Despite having the second-fastest time at 44.372 seconds, Venezuela’s Pablo Barrios and A S D Farfala rounded out the top six after catching an unfortunate four faults for having a rail down.

Emma Kurtz dominated the Stonelea Ring on Saturday at the Kentucky Summer Horse Show with wins on Dominik in the Small Junior Hunter division, as well as a clean sweep in the Large Junior Hunter 15 & Under division on Frederick.

“My rounds on Frederick went really well today,” Kurtz said. “He was amazing considering it was so late in the day due to the weather delay. He is very flashy with his white socks and blaze, and he has a great rhythm to his canter.”

Kurtz has had the ride on David Gochman’s chestnut gelding for over a year, and the pair are no strangers to winning blue ribbons and championship titles. In Saturday’s Large Junior Hunter 15 & Under division, Kurtz and Frederick won both over fences classes and the under saddle class.

“Frederick is a quiet horse. He is so fun to ride and I love him,” she continued. “He may be a bit looky at times, but he is usually on it and he was great today.”

Kurtz of Hudson, Ohio also impressed the judges on David Gochman’s gelding Dominik. This was the third show the duo has competed together and though they are a relatively new pair they were Grand Champions at Brandywine. On Saturday, they earned the blue ribbon in both over fences classes during the Small Junior Hunter division.

“Dominik was feeling great today,” Kurtz explained. “He was a bit frisky which was kind of good because he is usually too quiet, so the rides today were nice. He is very simple and sweet.”

She plans on riding him in next week’s Kentucky Summer Classic and then Sophie and Mimi Gochman will pick up the ride.

“I love Kentucky,” Kurtz explained. “I love to be back here! The show is always run so nicely. The jumps are beautiful and it’s just a really nice show to come to.”

Brett Burlington of Miami, Florida leads the way in the Large Junior Hunter 16-17 division on Popish Farms LLC’s Due West. The pair won an over fences class as well as placed second in the under saddle class.

“I thought my rounds went really well today,” Burlington said. “He is very easy and straightforward. I float the reins and everything usually works out well.  Basically the less I involve myself the easier it is. If I ride everything smooth and not change much, the distances come up nicely. The more adjustments I try to make, the distances can get a bit iffy.”

Burlington competed the 12-year-old gelding during the winter season at WEF and they were champions in Traverse City earlier in the summer.

“He is owned by a client at Sweet Oaks Farm and she is very nice to let me show him,” she explained. “I have been riding him on and off for a couple of years now. For the rest of the season we will work on having more consistent rounds and try my best.”

All junior hunter divisions will wrap up on Sunday morning at the Kentucky Summer Horse Show.