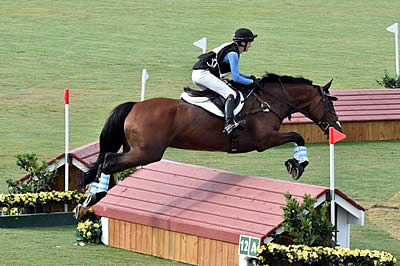 Mill Spring, NC – July 30, 2016 – More than 600 riders participated in the U.S. Pony Club Championships East held at Tryon International Equestrian Center from July 27-31, 2016. Embracing the Pony Club motto, “where it all begins,” competitors made history as the first riders to experience TIEC’s highly-anticipated cross-country course designed by Captain Mark Phillips, one of the world’s most renowned cross-country course designers. Out of all the Pony Club members in attendance, Greenville, SC native Rachael Wood (20) and her 17.2 hand Clydesdale x TB/Warmblood cross, Standing Ovation, were the very first competitors to set out around the newly minted track.

For Wood, being the first rider on the course was an “incredible” moment and will forever be one of her favorite memories at TIEC.

“We are pleased to have the facility’s first cross-country course rider be a Pony Club member,” said Mark Bellissimo, managing partner of Tryon Equestrian Partners. “Like the organization’s motto states, Pony Club is where many top riders around the world begin their equestrian careers, and we are grateful for the investment Pony Club makes in shaping these young equestrians.”

Sharon Decker, Chief Operations Officer for Tryon Equestrian Partners Carolinas Operations, added, “One of our priorities is growing equestrian sport and Pony Club is the place it all begins,” said Decker. “Pony Club’s focus on horsemanship, teamwork, respect for the horse and self, service, and education totally align with who we are as an organization. We are so proud to have this event here and look forward to many more exciting Pony Club events here in years to come.”

Wood has been a member of Pony Club since she was 12 years old and grew up riding in the western discipline before transitioning into the hunter/jumpers. She fell in love with cross-country after watching it once and started eventing shortly thereafter. Standing Ovation is blind in one eye, but lives to please a crowd according to Wood and was encouraged by the crowd’s continuous cheers.

“[Standing Ovation] was sharp and very excited,” said Wood. “Today with all the commotion he was extra excited, but he was very attentive to my aids. It was a little bit ‘looky’ for him, but he definitely came to play.”

Wood had previously participated in a Karen O’Connor clinic in 2014 at TIEC and was impressed by the facility’s rapid development since then, especially surrounding the George Morris Arena.

“When we rode in [the George Morris Arena], Legends Club wasn’t even here,” said Wood. “You come back and you’re like, is this the same arena? It’s crazy.”

Wood is returning in September to compete in the Nutrena® USEA American Eventing Championships presented by Land Rover (AEC), also being held at TIEC from August 31 – September 4.