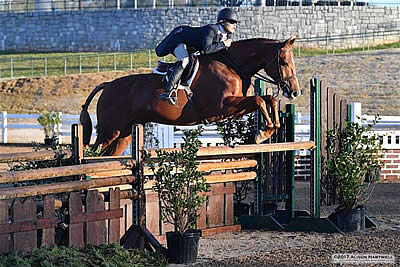 Seasoned derby riders, Holly Shepherd of Grand Bay, Alabama and Tim Maddrix of Leeds, Alabama, battled it out for the top placings in the $10,000 USHJA International Hunter Derby over a course designed by Paul Jewell of Lambertville, New Jersey.

Twenty-five horse and rider teams took to the oval arena and it was Derby Queen Holly Shepherd of Grand Bay, Alabama and Nina Moore’s Kodachrome who took home the blue ribbon for their overall score of 375.

“It was great to see so many compete in the International Hunter Derby,” commented Bob Bell, President of Classic Company. “We’ve had a strong showing in the hunter divisions both weeks I and II.”

Julie Curtin of Woodstock, Georgia took the top two placings in the $2,500 USHJA National Hunter Derby, presented by Kruse Cushion Ride, besting a field of 23 horse and rider teams over a course designed by Paul Jewell. Curtin and Cheryl Rubinstein’s Capisce took the class with their combined score of 179.5, but beating Curtin’s second ride, Rebekah Warren’s Cassico, by only half a point.

“In the Handy round, Capisce and I had a couple of options. We took the inside turns and he was really smooth and extremely handy which made for a good trip. He just edged out my other horse, so it was really close,” she said.

Final results had Holly Shepherd of Grand Bay, Alabama taking the third and fourth placings with Belle Rolfe’s Boure and Micaela Kennedy’s Magnus Hermes, respectively, with overall scores of 175 and 174.

Sabina Holtzman of Clayton, Missouri and her own Jerez Mail earned a seventh place ribbon and Cassino Royale, owned by Anna Huggins and ridden by Clay Alder of Germantown, Tennessee, placed eighth. Shanna Beyer’s Lacoste, ridden by Mary Mielenz of Collierville, Tennessee, earned a ninth place finish, and Curtin returned for a tenth with Select Sport Horses’ Hudson for a tenth place ribbon. SLF Bellarena, ridden by Daniel Geitner of Aiken, South Carolina and owned by Helen Byrd, placed eleventh, and Hannahlea, owned by Kelly Sims and ridden by Maggie Diehl of Alpharetta, Georgia, wrapped up the class with a twelfth place.

“I’ve ridden Cheryl’s horse before, but I rode him as a Pre Green. I was excited when Phoebe and Cheryl asked me about a week ago to ride him,” said Curtin. “He’s [Capisce] has really matured and grown up a lot and we just clicked right away. He’s a wonderful horse and I felt so comfortable on him.

“Paul used the same course for us as the International Hunter Derby and it rode really well for both heights,” she added. “It was open, flowing and there were lots of single jumps. Because the arena is very long, but not as wide, he did a great job on making it flow. He put a couple of jumps at the end of the ring because it was so long he had to use some of the width. The very first jump was on the end of the ring and the horses had to pay attention at Jump 1,” she commented. “But Paul let us finish with a nice long run to an oxer for our last jump which was really nice.

“It was so nice to see both the International and National Hunter Derbies with big numbers, especially now at the end of the year,” she added. “I’m looking forward to Gulfport this winter and plan on doing four weeks there.”