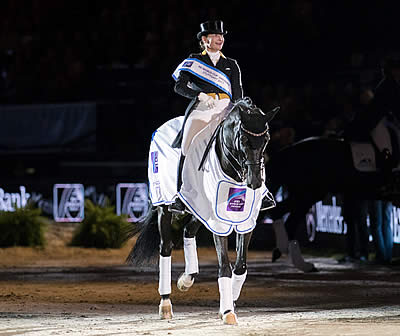 With style, panache and the greatest of ease, defending series champions Isabell Werth (48) and her wonderful 12-year-old mare Weihegold cruised to victory at the third leg of the FEI World Cup™ Dressage 2017/2018 Western European League on home ground in Stuttgart, Germany. And in a feast of fabulous performances it was fellow-countrywomen Dorothee Schneider (Sammy Davis Jr.) and Helen Langehanenberg (Damsey FRH) who slotted into second and third places.

Sweden’s Tinne Vilhelmson Silfven (Paridon Magi) finished fourth, but only fractionally ahead of Germany’s Fabienne Lutkemeier (Fabregaz) and Jessica von Bredow-Werndl (Zaire-E) in fifth and sixth spots. There was nothing fractional about Werth’s win, however, her score of 87.575 percent leaving her well ahead of Schneider who posted 82.805. And it was a particularly satisfying result for the phenomenal athlete who this year alone claimed her third FEI World Cup™ Dressage title along with triple-gold at the FEI European Championships in Gothenburg (SWE).

“Weihe has had such a great year, and after Gothenburg we gave her a long break but we thought it would be lovely to bring her to Stuttgart for the home crowd to see her and it was really nice. She’s only been working lightly for the last few weeks so we didn’t take the full risk like we did in Aachen or Gothenburg this summer, but I’m very happy with how she went; it was a great day!” — Isabell Werth (GER)

The Freestyle test wasn’t perfect – “the mistake in the two-tempis was all mine!” Werth admitted, but it was still nothing short of spectacular. Taking “the full risk” in Dressage terms means chasing down marks by challenging the horse to produce each movement to the maximum, although when it doesn’t come off it can prove expensive. The fluency of Werth’s work with Weihegold was so exquisite, however, that even an error couldn’t prevent their absolute supremacy.

Schneider’s 11-year-old stallion Sammy Davis Jr. continues to impress in his first season at Grand Prix level and this pair posted some massive artistic scores, while Langehanenberg’s 15-year-old stallion Damsey FRH produced breath-taking extended trot on his way to earning a score of 79.615 for third place. “He was super-fresh but really happy to be out competing and really keen to perform. He really came to life in his test and it’s great for an older horse like him to be still enjoying competition so much!” said the 2013 FEI World Cup™ Dressage champion.

Werth doesn’t earn points in the Western European League series and only has to line out in the qualifiers with whichever horse she chooses to defend her title at the 2018 Final in Paris, France next April. She has three to choose from, Don Johnson taking runner-up spot at the opening qualifier in Herning, Denmark last month before Emilio came out on top in Lyon two weeks ago, and then Weihegold followed suit. She’s spoiled for choice, and her next outing will be at the sixth leg in Amsterdam, The Netherlands in January.

Before that, however, the rest of those chasing down a much-coveted place at the Final will be battling it out in round four at Salzburg (AUT) and the fifth qualifier at London Olympia (GBR) in December. Sweden’s Patrik Kittel continues to top the league table by a considerable margin ahead of Switzerland’s Marcela Krinke Susmelj in second place, Spain’s Morgan Barbancon Mestre in third and Germany’s Dorothee Schneider who has moved up from 13th to fourth spot thanks to her runner-up finish.

Watch Isabell Werth and Weihegold take the win in front of the home crowd here on YouTube.