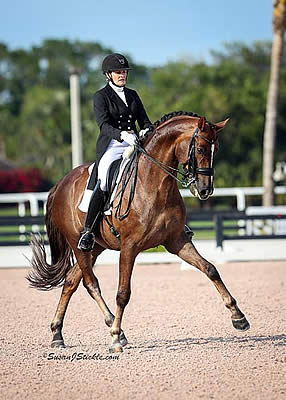 On Friday March 10, Olympian Ashley Holzer (CAN) and Sir Carmello, a 2007 Oldenburg stallion (Sir Donnerhall x Katharina x Feiner Stern) owned by Peacock Ridge Farm, were victorious in the FEI Grand Prix with a score of 72.800%.

Commenting on her mount, Holzer said, “I’m so very fortunate to be able to ride P. J. Rizvi’s Sir Caramello. P. J. bought him a year and a half ago from Patrik Kittel. This was just his second time showing at the Grand Prix level.”

Holzer debuted the stallion in February, winning the Grand Prix class with him then as well.

“He is such a talent,” Holzer continued. “I am looking forward to being able to ride this amazing horse in the international ring in the near future. He is so exuberant, and he is just learning to balance and control all of his power. The mistakes he makes are really when he tries too hard.”

Holzer said that the stallion is a favorite in the barn. “At home he is a complete sweetheart and loves spending hours in the paddock,” she explained. “His barn name is ‘Chewy.’ He is very spoiled by everyone and is such a kind horse.”

Placing second to Holzer in the FEI Grand Prix was Gloria Schriever (CAN) and Zenith De Pessel, a 2004 KWPN gelding (Gribaldi x Sgina x Ronaldo) owned by Schriever, with a score of 70.300%. Third place was captured by Nichole Suzanne Smith (USA) and Ebikur, a 2001 Oldenburg gelding owned by Patricia Gillian, with a score of 69.000%.

The National Show concluded on Sunday, March 12, with a victory in the FEI Prix St. Georges for Esteban Quiros (CRC) and Farewell IV, a 2001 Westfalen gelding (Fidermark x Riga) owned by Theresa Davidson, with a winning score of 70.132%.

Second place went to Michele Sizemore (USA) and Carlovingio, a 2004 KWPN gelding owned by Marco Bernal, with 65.526%. Third place was captured by Pamela Davies (USA) and Lagerfeld, a 2003 Westfalen gelding (Leonidas x Gitana), with a score of 65.132%.

Competition at AGDF will resume Wednesday, March 15, with the CDI 4* and FEI Grand Prix Freestyle, presented by Havensafe Farm; CDI 3*, presented by The Dutta Corporation; and CDI 1*, presented by CaptiveOne. The week also features a National Show and the 2017 Florida International Dressage Youth Championships. For more information and to see a full list of results, please visit www.globaldressagefestival.com.