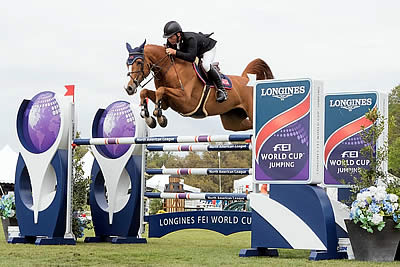 Until Minikus crossed the timers at 47.77 seconds, Germany’s Andre Thieme and Conthendrix held the lead as the seventh pair to ride in the 18-horse jump off. Thieme stopped the clock at 49.39 seconds with zero faults across the shortened track. France’s Alexandra Paillot rounded out the international podium with a third-place, double clear finish aboard Polias de Blondel. Their round clocked in at 51.68 seconds.

“I could have the reputation of going maybe a little too fast, once in a while,” said Minikus. “I was basically not trying to turn too tight or make a silly mistake by going too fast. And Andre was pretty quick. It was a great event and I’m very excited to be back. The two times I’ve been here, I’ve ended up winning so I’m all about Live Oak.”

From a starting number of 38 entries, nearly half of the field went clear in the first round over a fair, yet testing, course built by Bob Ellis (GBR). The first round featured 13 obstacles and 16 jumping attempts, with triple and double combinations. Ellis also utilized the field’s slope to test adjustability, scope, and carefulness at strategically placed verticals and wide oxers.

“My plan was to provide some good sport, which we had,” said Ellis. “We had a few clear rounds; more than I had expected, I have to say. But a great jump off. These guys made it very, very exciting.”

It was the final round that highlighted the day’s top combinations when only five pairs jumped double clear. Galloping lines and rollback turns asked multiple, difficult questions that caused rails to drop throughout the course, particularly at a careful vertical that followed on a bending line from the Longines oxer.

After a streak of faults in the riding order, the odds looked to be against Minikus to ride clear. But proving that the best had yet to come, he seamlessly and efficiently rode through tight turns to find the correct distances and came away with the coveted win.

Noticeably missing in the jump off were 2016 Rio Olympics pairs Ben Maher (GBR) and Tic Tac and Scott Keach (AUS) and Fedor, with four and five faults, respectively. And the winner of last year’s event, Marilyn Little (USA), also narrowly missed advancing with an unlucky rail in the first round.

The rankings have decided which 14 riders have earned bids to the Longines FEI World Cup™ Jumping Final in Omaha, Nebraska (March 29 – April 2). The top seven athletes from the East Coast (USA), top three from the West Coast (USA), and the two best-placed athletes from Canada and Mexico have qualified through the Longines FEI World Cup™ North American League.

Bob Ellis (Course Designer): “We did a little bit of damage to the ground over the last few days so it was mainly looking for some grass. I thought the footing for today was excellent.”

Todd Minikus (1st): “Actually the pressure was in the qualifying class. I had two jumps down, eight faults, and then I was driving back to Wellington very worried I wasn’t going to get qualified so it was a bumpy road the whole way until the last jump there.”

“I’ve been riding [Babalou] since she was 5 years old so it’s hard to even remember what she was like as a young horse, other than she was kind of mean. She’s kind of short necked so that’s just the way her neck places itself. Sometimes you’ve got to give a good release to jump.”

“I think the grass is a nice change. I’m not the biggest fan of grass. But it is a nice change from the everyday, showing on the all-weather footing. I think you do have to alter your style of riding a little bit. For example, you have to go back to a more sophisticated turn on the grass. I hate riding in the rain so I’m so glad it didn’t rain. But today I thought the footing held up awesome. We were going fast enough and the horses felt comfortable so it was all good.”

Andre Thieme (2nd): “I was pretty sure that I would end up in the top three with that. But I was also pretty sure I was not going to win it with that. But then one after another had rails and didn’t catch my time so then there was that final moment where I said, ‘Maybe.’ But then I saw [Minikus] warming up and I knew [it wasn’t going to happen]. He was on it and I saw it. So I was afraid of [Cian O’Connor] and of [Minikus]. I have to say that after winning the $10,000 leading rider award, I felt like a winner.”