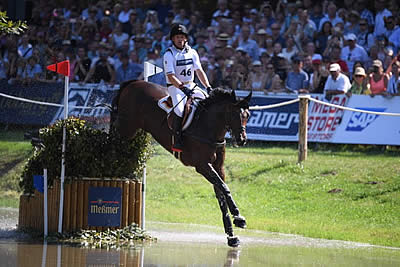 The German team is on course for another rich medal haul on home turf at the Longines FEI European Eventing Championship at Luhmühlen (GER).

Brilliant Cross Country performances by Michael Jung (GER) on new ride fischerChipmunk FST and defending champion Ingrid Klimke (GER) with the evergreen SAP Hale Bob OLD, who are in individual gold and silver medal positions, ensured the hosts retained their lead over defending champions Great Britain. They now have a three-rail advantage over their rivals going into the final Jumping phase.

“fischerChipmunk is a fantastic horse,” said Jung (37), who was visibly thrilled, but refusing to get ahead of himself by envisaging a record fourth individual European title. “Today was a great feeling. We went a bit fast at the beginning so I slowed down but he was always ahead of the time.

“It was a great feeling around the course everywhere. It was so nice to see so many people here supporting our sport.”

Klimke, 51, described her round as “pure fun – I felt like a passenger.” She commented: “For sure there was pressure. Hans Melzer [team manager] said to me, ‘Don’t pat your horse until you get to the finish line,’ because sometimes when I am so thrilled I pat him all the time. I say, ‘Bobby you are my hero’, so I wanted to really focus. He really loves cross country. It’s his job and he loves it.”

A cluster of early riders, notably British and Irish pathfinders Pippa Funnell (Majas Hope, 21st) and Ciaran Glynn (November Night, 23rd), made Mike Etherington-Smith’s beautifully presented, flowing course look easy, but there was plenty of drama. There were 44 clear rounds, 22 horses came home inside the optimum time of 10 minutes 10 seconds, and a total of 20 of the 71 Cross Country starters remain on their Dressage score – but all nations had their difficult moments and this made for a thrilling day’s sport.

Kai Ruder, second out for Germany, stayed admirably calm when Colani Sunrise inexplicably refused to go into the start box, which cost the pair 16 time penalties, and Britain’s third starter, Kristina Cook, had an expensive run-out with Billy The Red at the skinny brush fence exiting the second water (12c).

“I was having a super ride,” said Cook sadly, “but he’s an experienced horse and I can’t make excuses. At the moment I am just very disappointed, for me and for the whole team.”

Ireland’s Sam Watson will also be kicking himself after crossing his tracks at the bird fence in the final water (20b) with Tullaberg Flamenco. Italy’s anchorwoman Vittoria Panizzon (Super Cilious) incurred 11 penalties for hitting the frangible gate at 10a and Belgian pathfinder Laura Loge on Absolut Allegro fell at the Rathaus fence (17) in the main arena.

Laura Collett (GBR), third after Dressage, was “gutted” to part company with London 52 after a mis-stride before the influential carved bird at the final water. Four others fell here and Dutch pathfinder Merel Bloom (Chiccolino) retired.

Jung, who has never been out of the individual medals in five European Championships, does not have a fence in hand over his compatriot Klimke. In turn, she has no margin for error over Luhmühlen first-timer Lt Col Thibaut Vallette (FRA), who rode superbly on the 15-year-old Qing de Briot – coincidentally this is the same final rider line-up as at Blair Castle (GBR) in 2015.

The team medals are equally close: Britain has nothing in hand over the French team, which only has a one-fence advantage over Italy. The Italians, currently in bronze medal position, have no margin over Sweden – both nations are seeking Olympic qualification – and Ireland is a mere 2.2 penalties behind the Swedes in sixth place.

“I think it was a really great day for the sport and for us in Luhmühlen,” said Event Director Julia Otto. “I would like to thank my whole team – they are just amazing the way they work.”

“We have seen some spectacular riding and some great decisions by people who may be riding at this level for the first time today,” Course Designer Mike Etherington-Smith (GBR) commented.

“I didn’t expect quite so many to get the time, but when you have great weather like this with excellent footing, it happens, but it could have been pouring with rain and, in my view, you have to prepare a course for all weather. It’s all about achieving a standard, so full marks to everyone. For me, it’s been a fascinating day. There’s always something new to learn, and if you think you know it all you might as well give up.”

Follow all the medal action in what’s sure to be a thrilling finale with FEI TV.