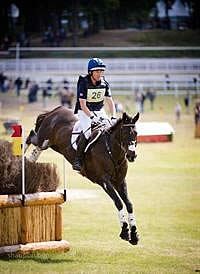 Will Faudree and Andromaque (Shannon Brinkman)

Saumur, France – The Land Rover U.S. Eventing Team had a mixed day Saturday at the Saumur CCI3*, as Pierre Michelet’s winding track proved influential. Land Rover Competition Grant recipients Will Faudree and Marilyn Little saw themselves climb up the leaderboard on the strength of double clear rounds. While Hannah Sue Burnett and Buck Davidson, who are also competing on Land Rover Competition Grants, experienced hiccups on course but saw their horses earn valuable experience at the prestigious French competition.

Faudree (Hoffman, NC) and Jennifer Mosing’s Andromaque produced a foot perfect round over the testing track to rise four places and head into the show jumping in fourth place. The classy 12-year-old Irish Thoroughbred mare never looked in doubt of a fast, clear trip as she effortlessly answered every question asked of her.

First on Michelet’s course for the American contingent was Little (Frederick, MD) and Raylyn Farms Inc. and Phoebe and Michael Manders’ RF Smoke on the Water. The eight-year-old Wurttemburger gelding made light work of the 28 obstacle course, jumping faultlessly to cruise through the finish nine seconds under the time. The 2012 USEF National CCI3* Eventing Reserve Champions head into Sunday’s show jumping on their dressage score of 52 in eighth place.

“Smoke was fantastic; he was totally on his game from the first fence. He was full of confidence and went out feeling like King Kong and came home well,” said Little. “I think I was far more concerned about the course than he was. He read them (the corners) beautifully. He’s only an eight-year-old but he marched around there like he was 12.”

Burnett (The Plains, VA) and Jacqueline Mars’ 10-year-old Irish Sport Horse gelding Harbour Pilot set off on course looking to improve on their 11th place following the dressage. However, a refusal early on at the corner at 6B meant the 2011 Pan American Games Team Gold and Individual Silver medalists incurred 20 penalties. Burnett now stands 30th on a score of 83.4 after also collecting 14.8 time faults.

The final U.S. entry of the day was Davidson (Ocala, FL) and Sherrie Martin’s The Apprentice. The pair was in the midst of a clear round until the nine-year-old Oldenburg gelding was deemed not to have gone through the flags jumping the corner at 18B. Davidson continued onto fence nineteen and the combination was subsequently eliminated for not correctly jumping 18B before proceeding to the next obstacle.

Australia’s Bill Levett and Shannondale Titan head into the show jumping as the overnight leaders on a score of 42.6.

The second Horse Inspection begins Sunday at 9am CEST with CCI3* show jumping getting underway at 3:45pm CEST.

To learn more about the Saumur CCI3*, visit: http://www.saumur.org/cci/accueil-gb.html.