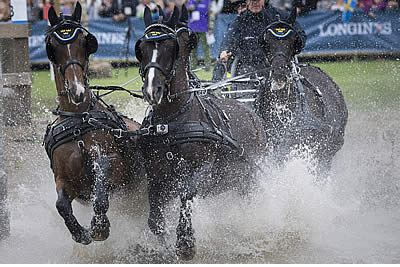 The Fédération Équestre Internationale (FEI) has allocated host cities for 13 FEI Championships for the next two years and nine FEI Driving World Cup™ legs for the 2019/2020 season.

“The FEI European Championships are among the FEI’s most important events, attracting top class athletes and horses for over six decades,” FEI President Ingmar De Vos said. “During the next two years equestrian fans will have the opportunity to enjoy thrilling sport in some of Europe’s biggest cities. The allocation of the FEI Jumping, Dressage, Para Dressage, Driving, and Vaulting European Championships to Budapest will further promote horse sport in Hungary, which already has a remarkable equestrian history.”

“This bidding process reinforces the FEI’s policy of transparency and fairness,” the FEI President commented. “It is a key step forward in harmonising the bidding for all FEI Championships, Finals, and Series.”

The allocations were made by the FEI Board, the body responsible for the general direction of equestrian sport’s global governing authority, at its in-person meeting at FEI Headquarters in the Olympic Capital, Lausanne (SUI).

The FEI Driving World Cup™ Final 2021 which will take place from 4-7 February was allocated to Bordeaux (FRA) by the FEI Board in March 2019.

The FEI Board decided to re-open the bid process for a multi-year allocation for the FEI WBFSH World Breeding Championships for Young Horses in the disciplines of Jumping, Dressage, and Eventing for the years 2021, 2022, and 2023. Allocations will be made at the FEI Board meeting in November 2019 at the FEI General Assembly in Moscow.

The full list of Championships allocated at the FEI Board meeting at FEI Headquarters in Lausanne (SUI) is:

The legs of the FEI Driving World Cup™ series for the 2019-2020 season were allocated as follows: