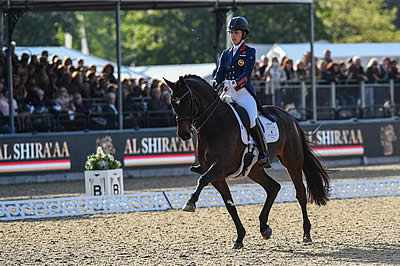 CHI Royal Windsor Horse Show basked in glorious late spring sunshine on its third day of world-class equestrian competition. Excited spectators arrived in anticipation ahead of the culmination of the Dressage and to witness the first of the week’s international Show Jumping classes. Results included a sensational victory for homegrown talent Holly Smith in the Manama Speed Stakes, and a supremely dominant Dressage display from Charlotte Dujardin in the CDI4* FEI Al Shira’aa Grand Prix Freestyle to Music. The day’s proceedings were also jam-packed with colourful, energetic and musical displays from The Dubai Mounted Police, The Mounted Band of the Household Cavalry, and The Musical Ride of The Household Cavalry Mounted Regiment.

Charlotte partnered her pupil Sonnar Murray Brown’s bay 12-year-old Trakehner gelding Erlentanz to an impressive winning score of 81.9% — the first time the horse has achieved over 80%. This was only Charlotte’s second show with the son of Latimer, whom she is riding while Sonnar recovers from a broken leg.

Carl Hester, who was second in the grand prix, withdrew the 15-year-old Nip Tuck ahead of the freestyle as he was found to be slightly lame. That left 10 combinations to battle it out in the shadow of the iconic Windsor Castle. Richard Davison and Bubblingh improved a place from the previous day, slotting into second with 78.31%. Last to go, Ireland’s Heike Holstein, finished third with 74.915% riding her home-bred mare Sambuca (by Samarant).

Charlotte said: “That’s my second freestyle with Erlentanz so it’s all really, really new. I wanted to test out a few things today; I wanted to go for a bit more, get more in my extensions, get him a bit braver in that arena.”

Charlotte rode to music from her double Olympic gold-winning partner Valegro — who met The Queen at Royal Windsor the previous day — which suited the bouncy Erlentanz well. Her high mark from the five judges came from Germany’s Katrina Wuest (84%), with the low of 79.625% from Finland’s Maria Colliander.

The popular home rider produced a superb test, showing clockwork passage, ground covering extensions and expressive flying changes. She received a perfect 10 for both her one-time changes and the double pirouette to the right. The only mistake in the test came when Erlentanz dropped into trot coming into the canter pirouette left. But Charlotte is the consummate professional and knows this music inside out, so was able to improvise and repeat the movement later in the test to claw back marks.

“I came in and half-halted but — and it was totally my fault — I think I was too close to the board at the top end and as I went to turn, he just backed off me and trotted,” explained Charlotte. “I did manage to do it again and kept thinking the whole way through, ‘Where am I going to put it back in, where am I going to put it in?’ I decided to do it at the end of the one-times, landed on the left and managed to fit it in, so that was a relief — at least I got it back. I’ve only ridden him for about three months so it’s just a question of getting to know him, finding the buttons and knowing how much I can push, and when I can’t.”

Charlotte is a regular at Royal Windsor, coming into the 2019 show to defend her double wins from last year aboard the young mare Mount St John Freestyle.

“This week’s been amazing,” she added. “Yesterday, I met The Queen with Valegro, and today the sun is shining and this is the most amazing arena to go into. You have the backdrop and the crowd around you. I love this show.”

Richard Davison has taken his time with the tall, powerful home-bred Bubblingh. The 13-year-old looked stronger and more balanced than ever before, with particularly notable self-carriage. Richard’s bespoke Gangsta’s paradise music is fitting for the horse, and he was on the beat, particularly in the piaffe work, which achieved a 9.5 from the judge at C, Stephen Clarke. Richard showed off Bubblingh’s straightness and power with 14 flowing one-time changes down the centre line right at the judges, into a pirouette.

Fellow British rider Louise Bell was just pushed off a podium finish by the last combination, but her 73.34% ride to Sweet Home Alabama and Justin Beiber’s Despacito was also a new personal best. Her horse, the 13-year-old Into the Blue, is no stranger to Windsor; Louise used to ride him in the showing classes before switching disciplines.

Windsor is always a valuable litmus test for riders hoping to bid for a championship place. The arena is atmospheric and selectors will have been keeping a keen eye on proceedings ahead of this year’s European Championships in Rotterdam in August.

The seven-year-old, produced by the Stanley Grange Stud in North Yorkshire, won at Horse of the Year Show and Royal International last year and this was only his second outing of the season.

The consistent 12-year-old chestnut won his class here last year but was pipped in the final reckoning.

“This horse has been Mr Consistent,” said Oliver, son of master showman Allister Hood. “He’s been in the championship here for the last five years, but this is the best ride on him that I’ve ever had and thoroughly deserves his reward.”

Reserve went to Cheshire with the lightweight winner Bling Cobsby, a horse originally bought by producer Vicky Smith for her partner, Alan Marnie, as a leisure ride.

Alice Homer, 17, scored a memorable win in the maxi cobs when deputising at the last minute for producer Jayne Ross to win on A Masterpiece, despite having never even sat on the horse before. This was Alice’s second victory in as many days, as she also headed the working show horses with her mother Loraine’s Miserden Savannah.

In-hand native ponies were another major feature, and the coveted supreme title, also fought out in the Castle Arena, headed to Devon with Cathy Wood and her stunning Connemara stallion, Contepomi Cashel, ahead of Sarah Noble’s home-bred Dales mare, Stuffynwood Daffodil.

Great Britain’s star Jumper, Holly Smith, scored a memorable victory against some of the world’s best riders on day three of the Royal Windsor Horse Show. 16 of the world’s top 20-ranked riders entered a beautifully sunny Castle Arena for the CSI5* Manama Speed Stakes Jumping competition, the first international Show Jumping class of the week. The competition saw 24 riders progress to the second phase, with 18 of those completing a double clear to vie for top honours.

One of the last riders into the Arena, Holly Smith and her spirited nine-year old chestnut gelding, Fruselli, produced a gutsy performance, which saw the duo complete the two-phase course in 26.11 seconds. Smith cleared the final fence with grace and ease, knocking Irish world number 25-ranked rider Bertram Allen into second place, who completed the course in 26.81 seconds. The complicated course, which included some tough tight turns, did not prove to be a problem for world number five-ranked rider Martin Fuchs and his grey gelding, Silver Shin, who finished in third place in 27.01 seconds.

After lunch, international Show Jumpers from 11 nations, including 10 of Great Britain’s leading riders, went head-to-head to compete in the CSI5* Pearl Stakes International Jumping Competition. British Jumping prodigy Harry Charles and his gelding Borsato proved to be the best of the Brits. Placed in the top six with a final time of 38.06 seconds, 20-year-old Charles was on scintillating form, as he cleared the 16 fences with conviction. But in the end, it was Belgian rider Gregory Wathelet and his 10-year-old bay gelding, Spike Vd Withoeve who came out on top, taking the competition to another level, navigating the eight-fence jump-off to finish in an unbeatable time of 36.59 seconds.

The ten entries across the two classes in the coaching marathon – three in the road coaches and seven in the private drags – enjoyed a dry and sunny drive through the Home Park before delighting a full crowd in the Castle Arena at Royal Windsor Horse Show. Judge from USA, Bob Longstaff, found his champion in John Brown and his team of bay and grey Dutch warmbreds put to his original Shanks-built Tally Ho Road Coach. This is their sixth successive year of taking the championship. Reserve champion was the winner of the private drag section: Colonel Toby Browne CVO driving a team of Her Majesty the Queen’s greys to a Whitlock private drag. He also won the award for the best turned out coach.

It was the turn of the horse pairs to compete in the dressage phase of the Land Rover International Driving Grand Prix and their competition is considerably more closely contested than the horse fours. The first three placed competitors are separated by less than one penalty point.

Leading the field at the moment is Lars Schwitte from Germany. Together with his KWPN horses, he first competed here in 2017 when, having won the dressage, he went on to win the competition. He was again the winner of the dressage phase last year but dropped to fourth overall in the final result.

Schwitte’s good score of 44.32 is under attack from Argentina’s Baroness Amely von Buchholz, long term competitor here, who is just 0.1 penalties behind in second place. She also drives KWPN horses and is another who traditionally scores well in dressage. Last year she finished in eighth place overall.

Third place currently is occupied by first time competitor here, Sandro Koalich also from Germany and also a driver of Dutch-bred horses. He is the organiser of this year’s World Horse Pairs Championship which will take place in Drebkau in Germany in September.

Commenting at the end of this phase, Head Judge, Andrew Counsell, said: “The competition was much closer than in the horse fours with a good range of talented horses. However, a number are not yet supple resulting in tension at times and a failure to work together as a pair.”