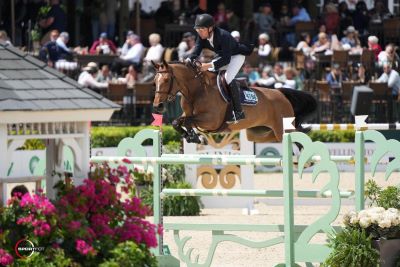 Wellington, FL – March 13, 2022 – The final day of week nine at the Winter Equestrian Festival (WEF) wound down its international competition with the $75,000 CaptiveOne Advisors 1.50m Classic CSI5*. The USA’s anthem was the last to play on Sunday, March 13, as Karl Cook (USA) and Kalinka Van’t Zorgvliet received the winning honors.

The day built in anticipation of its pinnacle five-star event which brought out a starting field of 59 internationally ranked combinations. Alan Wade’s (IRL) farewell test allowed riders 73 seconds to find their way around the track. As the fourth into the arena, Cook was the first contender to produce a clear effort aboard Helen Signe Ostby’s 12-year-old BWP mare (Thunder VD Zuuthoeve x Flipper d’Elle).

Two trips later, Ireland’s Shane Sweetnam ensured there would be a jump-off as he joined Cook with a fault-free round aboard Sweet Oak, Spy Coast, and Seabrook’s Alejandro. The challenge got the best of many representatives from the 16 different nations as both time and jumping faults accrued throughout the class with downed rails over various areas of the course.

Eleven performances were good enough to earn a spot in the order for the short track. Both Nayel Nassar (EGY) and Heather Caristo-WIlliams (USA) qualified two mounts each as they bid for the top spot. Wade’s jump-off course was full of twists and turns with very few related distances, which gave the athletes multiple ways in which to shave off some time. As the first to qualify for the jump-off, Cook was the trailblazer of the second round and held no punches. He set off at a winning pace from the beginning with their blazing fast leading time of 37.04 seconds, daring the 10 pairs following to catch up. As the class came to a close, either a fence fault or a slower time appeared repeatedly, and it became clear Cook had put forth an impossible challenge to beat.

A competitive field of 30 horse and rider pairs participated in Medium Pony Hunters sponsored by Always Faithful Equestrian Club. The number of entries resulted in a California Split of the classes which led to the division concluding with two champions. Vivian Golden with Baroness of Locheil and Jimmy Torano aboard Paris Charm took the joint top honors.

Golden and Baroness of Locheil, a nine-year-old Welsh Pony Cross, just started competing together at the start of circuit, but have already seen multiple championships in the division including weeks three, five, eight, and premiere week.

J. J. Torano and Paris Charm, a 14-year-old Welsh pony mare by Halifax owned by Megan d’Amico, were the Section B champions. They won three classes and picked up another second place for the additional top tricolor.

Torano has been riding Paris Charm since the beginning of the 2022 WEF, and while the mare was initially nervous, the pair have formed a good relationship in a short amount of time.