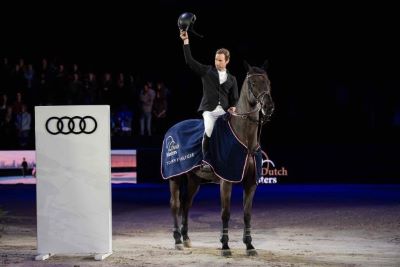 Thirty-eight competitors representing 14 nations made up the impressive start list for the 1m50 Audi Prize – the feature class on day two of The Dutch Masters 2022, Saturday 12 March.

Show jumping legend Marcus Ehning (GER) was the first rider to post a clear round on the score board, showcasing the harmonious partnership he shares with the stunning grey mare, Calanda 42. A total of a nine horse and rider combinations, four of which flying the flag for the Dutch, followed suit to set up a thrilling jump-off in front of the supportive crowd.

Belgium’s Pieter Devos applied the pressure, displaying a masterclass in horsemanship to record the first, and only, double clear, stopping the clock on 37.20 secs. With a strong line-up still to enter the ring, tension built among the home crowd hoping to witness the second Dutch victory of the day. The penultimate rider to face the challenging course, Willem Greve, produced a lighting quick round, but with four faults at the last fence, he had to settle for second place.

Pieter, how was that jump-off course this evening, it looked tricky?

To be honest, it was a strange jump-off course; it was not really fluid, and I didn’t think I had too much of a chance, because with my horse I can leave out strides, but it’s not so easy to do the short turns, and this was all about turning, so I was not really confident before I went in. I must say though, he did everything he could to leave the fences up, he did really well and I’m really happy with him.

What is your horse, Kannabis van de Bucxtale, like?

He’s a very special horse; he’s ultra-careful. In the warm-up, he’s quite nervous with all the other horses around, but in the ring, he really is a trier, he really wants to go clear and he tries his best. If you get him relaxed, he tries everything for you, but it’s not easy to get him relaxed.

What is it like to have to spectators back at The Dutch Masters this year?

It’s super to have the spectators back, that feeling that you are supported by the crowd again. We have got so used to riding by ourselves and not feeling that atmosphere when you go into the arena. Now you go in and you see the people and you feel again one of the reasons for doing what we are doing.

How are you feeling ahead of the Rolex Grand Prix tomorrow (Sunday)?

The Rolex Grand Prix is a different level, but I hope my horse is in good shape tomorrow. I am riding another one: I am riding Claire Z, so we will see; we will do our best and see where we end up and tonight gives us a lot of confidence.