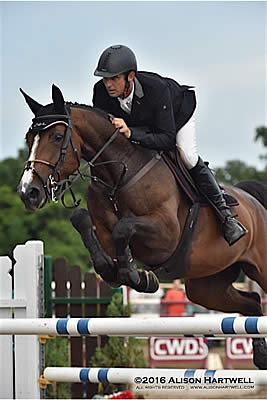 Why does Christoph Schroeder of Wellington, Florida love the Charleston Summer Classic? Well, besides winning the Week I $5,000 Horseflight Welcome, he rode away with the win on Marion Head’s Heliante Ter Wilgren in Friday’s $35,000 Devoucoux Grand Prix, coached his student KC Aarem to third and fifth place finishes, grabbed eleventh place with Faith Davis’ Dekadenz, and will be spending Saturday trail riding on the more than 23 miles of beautiful scenic trails at the Equestrian Center while planning a day of beach riding on Sunday with six of his horses!

“We love showing, vacation and our family,” Schroeder said. “We are so glad we came here!” he added.

Twenty-three horse and rider teams tackled the $35,000 Devoucoux Grand Prix last night before a sold out VIP tent, sponsored by Seabrook Equestrian Club and Schroeder rode away with the blue ribbon and big check. Schroeder has been riding Heliante since November last year. “She’s only nine and has the best character in the world,” commented Schroeder. “This was her first win with me,” he said happily.

Classic Company Course Designer and Technical Coordinator, Allen Rheinheimer of Zionsville, Indiana, set a first round course with a time allowed of 84 seconds, which included a combination that saw many in the first round dropping rails. Only six would go clear and advance to the second round.

The time allowed in the jump off round was 41 seconds and had both Schroeder with one and his student, KC Van Aarem, with two in the lineup. “I had to get my horse ready, but I had to help KC too. I didn’t want to slow the class down, so I’d rather take time away from me and my horses and help her,” he added.

KC Van Aarem, of Woodbine, Maryland, in the irons of her won Temple Run, was the first to go in the order and had two rails for a total of eight jump faults in a time of 37.535 seconds.

Gemma Paternoster of Wellington, Florida and her own Demi followed Aarem with a four fault round in a time of 36.335 seconds, which temporarily took the lead. “I was really happy with her performance,” said Paternoster. “She is only eight and has gone two for two in advancing to the jump off rounds for her first Grand Prix,” she said.

MHS Automatic, owned by Cerulean Stables, LLC and ridden by Amanda Forte of Glenmoore, Pennsylvania, followed Paternoster and turned in the first clean jump off round in a time of 31.592 seconds and took the lead from Paternoster.

Michael Kocher of Tryon, North Carolina followed in the order in the irons of Missy Clark’s Baluga; however, two refusals at the first fence of the combination would have them eliminated and finishing in sixth place overall.

Schroeder and Heliante Ter Wilgren followed Kocher and Baluga. “My plan for the jump off with Heliante was I wanted to try a five instead of a six at the first line and a four instead of a five on the last line, and in between, keep the turns tight,” he said. “We’ve been getting to know each other and she is the kind of horse where you need to listen to her more than you need to have her listen to you,” he said, “She knows that if I depend on her, she gives a lot,” he continued. “She can turn well and then she even gets more active,” he said. “When you have a really scopey horse like her, the tighter turns make it more interesting for her and she jumps even better,” he said. “And I guess that’s the trick,” he added. The pair turned in a clear round in a time of 30.254 seconds, taking the lead and setting the new time to beat.

Sitting in the enviable last to go position, Aarem followed Schroeder with her second mount Mastermind. Despite their clear round, their time of 31.654 seconds would not be fast enough to take the lead and the pair would settle into a third place finish.

Finishing in seventh place was Maggie Sjoberg’s Something Gained, ridden by Abbly Sjoberg of Ila, Georgia, with a first round time of 84.933 seconds with one time fault.

Eighth place honors went to the fastest four fault first round, Kasarr, owned and ridden by Erin McGuire of Cornelius, North Carolina, after posting a time of 74.192 seconds.

Schroeder returned for eleventh place with Ruth Davis’ Dekadenz, and Megan Wexler of Reddick, Florida wrapped up the class in twelfth place in the irons of Penny Lane Farm’s Maximus.

“My horses went really well here,” said Schroeder. “We want to keep moving Heliante up and I’m really happy with her progress,” he added.

“We’re thrilled with the attendance this year,” commented Bob Bell, President of Classic Company.  “We have so many new people here showing with us from all over the country enjoying our ‘show-cation’ horse show, the beautiful islands of Kiawah and Seabrook and Charleston, which is Conde Naste’s #1 Destination city in the country,” he said.  “We have all had a blast this week and are looking forward to another week of blue ribbons and beaches!”