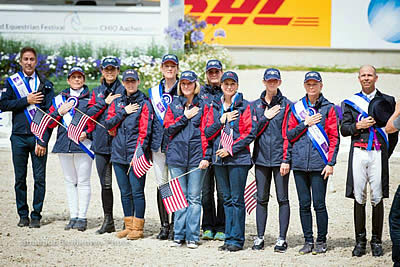 Aachen, Germany – The Dutta Corp. U.S. Dressage Team had solid performances throughout the Lambertz Nations Cup at CHIO Aachen. Led by Chef d’Equipe Robert Dover, the team of Katherine Bateson-Chandler, Shelly Francis, Arlene “Tuny” Page, and Steffen Peters garnered the Silver medal with a total score of 437.139. Saturday’s final placing also clinched the inaugural FEI Nations Cup™ series title for the U.S. Germany had a dominant performance in the eight-nation field, taking the top three places in the Grand Prix and Grand Prix Special and earning the Gold medal with a total of 492.598. Denmark finished with the Bronze medal on a total of 430.418.

“I could not be more proud of our team here in Aachen,” said Dover. “It’s great when you consider that there are some of the best countries in the world selecting their teams for the Rio Olympic Games here and our team placed second, a team who included our traveling reserve and other super combinations that are not on our Olympic team. I am so proud that of all of them they stepped up to the plate.”

Coming into this sixth and final Nations Cup event in the 2016 series, the U.S. needed to secure a placing ahead of Sweden, who was four points ahead of the U.S. on the leaderboard, to secure the title. Dover was extremely pleased with this weekend’s outcome. “We set a goal right from the beginning to win this series. Winning the first event in Wellington was exciting, but we anticipated that win. At Odense we had a nice showing with some of our greener combinations. Then going on to Compiègne, we thought, ‘Yes, we have a strong chance’, but when we won that it really got me excited and planning. After a second-place finish at Rotterdam the idea was to come to Aachen and place second or third and beat Sweden, but to actually place second with this group, that was really exciting.”

In Thursday’s CDIO5* Grand Prix, Peters (San Diego, Calif.) and Four Winds Farm’s Legolas 92 anchored the U.S. team with an excellent test, receiving a score of 77.324% from the Ground Jury of Maribel Alonso (MEX), Susanne Baarop (DEN), Stephen Clarke (GBR), Eduard de Wolff van Westerrode (NED), Peter Holler (GER), Thomas Lang (AUS), and Gary Rockwell (USA) to finish in fourth place. Francis (Loxahatchee, Fla.) and Patricia Stempel’s Doktor demonstrated their partnership with a steady test to score 72.200% for 12th place. Page (Wellington, Fla.) and her own Woodstock had a consistent test, marred only by a mistake in the two-tempi changes, scoring 68.971% to finish in 23rd place. Bateson-Chandler (Wellington, Fla.) was the first down centerline for the U.S. aboard Jane Clark’s Alcazar and had a solid test, aside from issues in the piaffe and collected walk, to post a score of 66.314% for 32d place.

The U.S. Team put forth a determined effort in Saturday’s CDIO5* Grand Prix Special to earn the Silver medal. Peters and Legolas 92 were the final ride of the day and they did not disappoint with impressive piaffe and passage work and lovely canter half-passes. The Ground Jury of Maribel Alonso (MEX), Stephen Clarke (GBR), Eduard de Wolff van Westerrode (NED), Peter Holler (GER), and Gary Rockwell (USA) rewarded the pair with a score of 76.627% to put them in fourth place.

Peters was very pleased with the maturity Legolas 92 exhibited, stating, “The first huge relief was when we came in, the announcer said a few things about Legolas, and he did not react whatsoever and that is the exact reason why we were here. I still felt like at Rotterdam, in the Grand Prix, that we were still a little on edge during the first minute of our test, but now he has proven that he can deliver for the team and this is exactly what the plan was. He did the piaffe movements very nicely, as well as his changes, and did beautiful canter pirouettes. Thursday and today the judges gave him a really high mark for his collected walk and that is a gigantic accomplishment. It’s those little things that most people who don’t know Legolas that well don’t appreciate, but I am just stocked about those tiny little things.”

Page and Woodstock had a much improved performance in the Grand Prix Special, producing an accurate and rhythmical test. They nailed their tempi-changes and demonstrated lovely passage work, scoring 71.451% to finish in 13th place.

Bateson-Chandler withdrew Alcazar from the Grand Prix Special following a case of colic on Friday.

The top 18 individuals, including Francis, Page, and Peters, will move forward to Sunday’s Grand Prix Freestyle.

The U.S. is also being represented this week at CHIO Aachen in dressage, driving, and show jumping. On Thursday evening, the Hermès U.S. Show Jumping tied for the Silver medal with France in the Mercedes-Benz Nations Cup. On Saturday afternoon, the Land Rover U.S. Eventing Team finished in sixth place in the CICO3* Nations Cup. The U.S. Driving Team is in second place after the first phase, competition continues Saturday with the marathon phase, and concludes on Sunday with the cones. Find out more on USEFNetwork.com.