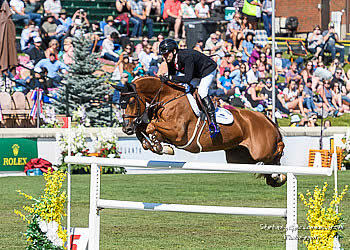 Hot off their victory in the $133,700 1.60m CANA Cup on Thursday, September 5, Lamaze and Chacco Kid, a 13-year-old Oldenburg gelding (Chacco-Blue x Come On) owned by the Chacco Kid Group, returned to the international ring to repeat their winning ways.  The $133,700 Suncor Energy Winning Round is held in a format that sees the top 10 ranked riders following the opening round return for an all-deciding second round where the fastest clear wins.  Lamaze had the advantage of going last in the order and knew exactly what he had to do to win.

The 2008 Olympic Champion left nothing to chance, putting on a breath-taking display of world-class show jumping for the huge crowd as he tackled the testing 1.50m track set by two-time Olympic course designer Leopoldo Palacios of Venezuela.  As he sailed over the final fence and through the timers, the clock flashed 44.73 seconds, eclipsing the time of 46.62 seconds that had been set by Italy’s Lorenzo de Luca riding Limestone Grey.  For the second time, victory belonged to Lamaze and Chacco Kid at the CSIO5* Spruce Meadows ‘Masters’ tournament.

The victory was an emotional one for Lamaze, who publicly revealed in June that he has been battling a brain tumour.  After praising his “clever” mount Chacco Kid, Lamaze dedicated his victory to a long-time friend who was also a winner in the International Ring during her competitive riding career.

“My good friend, Kim Kirton, is here,” said Lamaze, 51, as he was being presented with the Suncor Energy trophy.  “She doesn’t travel too much but when she does, good things seem to happen.  Kimmy, this one is for you!”

Lamaze now turns his attention to competing with Coco Bongo as a member of the Canadian team in the $530,00 BMO Nations’ Cup, also on Saturday, September 7.  He will close out the weekend by riding his 2016 Olympic bronze medal partner, Fine Lady 5, in Sunday’s $3 million CP International, presented by Rolex.  Lamaze has won the event twice before, in 2007 and 2011, both times riding the legendary Hickstead.

Lamaze is the all-time money winner at Spruce Meadows, having amassed more than $6 million in career winnings at the iconic Canadian show jumping venue.